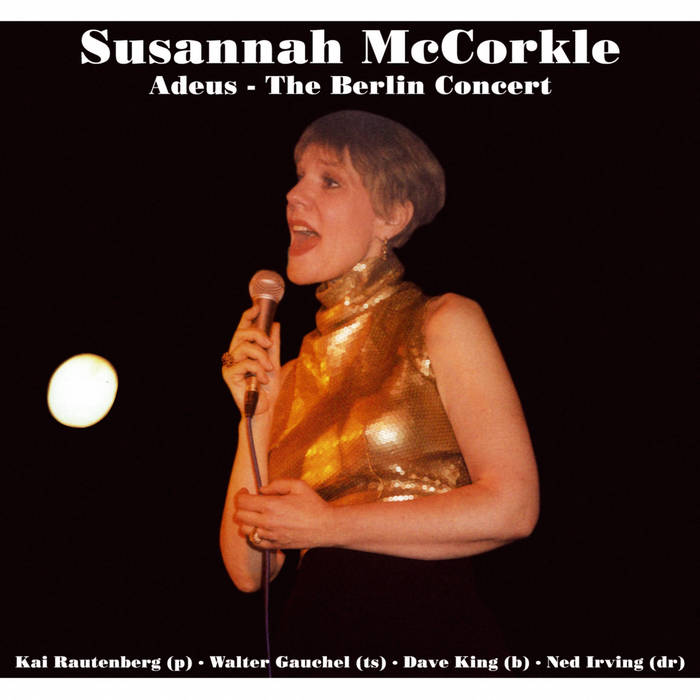 woldtop I just love her voice, and her engagement with the audience. I would have loved to have met her, at any stage of her marvellous singing life. She is just beautiful!

Exceptional musical legacy of one of America`s greatest yet misunderstood songbirds: jazz singer Susannah McCorkle (1946 - 2001) and quartet live in Berlin 1996, recorded at the pinnacle of her career in front of an enthusiastic audience. “Susannah McCorkle is in the forefront!” (Tony Bennett, 1986). Finest songs from her repertoire, mastered from lost tapes recently discovered in the archives of S. Schmidt-Joos, with K. Rautenberg (p & arr), W. Gauchel (ts), D. King (b) and N. Irving (dr) - 6-Panel-Digipack CD, new sleeve notes and unknown photos - her first live release!

My friend Bongo is to blame for everything. In 1993 he brought us a LP to Berlin, which he had found in the thrift area of a department store on the Mönckebergstraße in Hamburg. We didn`t know the singer. Her name was Susannah McCorkle and she sang standards. The album was entitled “How Do You Keep the Music Playing?”. For nearly a quarter of a century, we - that is Kathrin Brigl and me - designed the weekly 90-minute radio program "Showtime" at two Berlin radio stations, first at the RIAS, then at the SFB/ RBB. We knew the entertainment landscape well but Susannah`s music touched us deeply.

With an equally strong and sensitive contralto, always a little brittle sounding, she sang yesteryears hits but also more contemporary songs in a way we had never heard before. She used her slight vibrato, her breath and meaningful pauses as a means of expression. And above all, she also interpreted the verses of the songs that are usually omitted. Eventually we found a singer, who especially paid attention to the song lyrics.

Her version of “There's No Business Like Show Business” in a slow triple time sent shivers down our spine. We knew the song from Irving Berlin's musical "Annie Get Your Gun" (1946) as a shining anthem to the show business only, but Susannah showed the dirty back side of the first night euphoria, the disappointments on stage, the loneliness in the dressing rooms, “the headaches, the heartaches, the backaches, the flops, the sheriff who escorts you out of town“. The studio album, released in 1985 on Concord Records, is still available. I recommend it here as an immaculate addition to our live CD, which is, by the way, the only one there is.

We had the sudden feeling that we have to make the acquaintance of this singer and have to interview her for our radio program. On our next visit to New York, we found her phone number at Concord and called her. As always we stayed at the "Algonquin", the hotel of literary legends on 44th Street West, and were told that Susannah McCorkle performed at the “Oak Room” - the fundamental unit of the New York cabaret scene - every summer for a whole month. The professional relationship suddenly turned into friendship that lasted until her death. Our conversations in New York and her latest CDs served as the basis for no less than nine RBB radio broadcasts between 1993 and 2001.

Susannah McCorkle was born on first of January 1946 in the Californian University City of Berkeley near San Francisco. Her father was a college professor with an alcohol problem and therefore often changed educational institutions in which he worked. Her mother, with whom Susannah had a deep and lifelong love/hate relationship, was a slightly crazed housewife who got lost in the dreams of musical and operetta with a glass of champagne. So Susannah grew up alongside an older sister but especially with a small, red bakelite radio with which she opened up “the world of music”. For her, that was the Great American Songbook and jazz in particular.

She was very good at languages and could have easily matriculated at the University of California at Berkeley, but it was the late sixties and the time of student rebellion. The campus was dominated by defiant or stoned hippies with their illusion of an upright society - in Susannah's eyes an atmosphere of drugs, sex and violence. She moved to Paris to study languages with the career goal of being a translator at the UN. There, she met her fate in the form of a fellow student who allowed her to live in her apartment with LPs for a couple of weeks. That`s where Susannah McCorkle heard Billie Holiday, knowing without any doubt: I will be a singer!

She went to Rome and continued her university studies, earned her living with translations, sang on cruise ships and in pubs. In 1972, Susannah moved to London, where she wrote short stories, recorded two LPs and developed her vocal style. Her prose texts were published in renowned magazines such as "Mademoiselle" and "Cosmopolitan" and also included in the "Book of O'Henry Price Short Stories". The two albums with songs by Harry Warren and Johnny Mercer were reviewed by the "New York Times" and received high praises by "New Yorker" and "Down Beat". At the end of the seventies, the singer returned to the US and premiered in New York at the "Cookery" in Greenwich Village, where she worked for five months.

Since then, she appeared in America's most famous jazz clubs, at New York's Lincoln Center and Carnegie Hall, accompanied by jazz trios, big bands and symphony orchestras. Jazz stars such as saxophonists Al Cohn, Jimmy Heath and Frank Wess were some of the brilliant artists with whom she recorded in the studio. Precious writers like the jazz critic Leonard Feather pushed her career, journals such as “Stereo Review” came up with cover stories, pop superstar Tony Bennett said "She is the best among all current singers” - but still she did not become popular among jazz fans outside the Anglo-Saxon countries.

She does not scat or improvise enough, it was said, but even Billie Holiday did not choose to vary the melody of her songs. Susannah`s art lies in the co-dependence and interplay of phrasing, the articulation of sounds and the text expression. As a writer and translator, she was very concerned with the language. She wrote lyrics herself and perfectly translated the beauty of Portuguese Bossa Nova lyrics from songs originated by Brazilian artists. Her imposing discography is a huge compendium full of forgotten song gems “From Broadway to Bebop” and “From Bessie to Brazil” (two album titles of SusannahMcCorkle), carefully researched in archives and libraries and impressively performed with a swing feel.

This concert recording presents some of the finest songs from all parts of her repertoire. She had arrived in Berlin in April 1996, to sing on the previous evening of my sixtieth birthday at the jazz club “Quasimodo” - a gift to me from the broadcasting station. I got permission to select a concert program (somewhat shortened here), that features works from her fourteen CDs of that time, and to choose the fabulous sidemen. Susannah and the unforgotten pianist Kai Rautenberg (1939 - 2013) worked out the arrangements. These were magic moments that we shared with our listeners, in two parts of our "Showtime" program under the headline "Sigi Sixty".

Susannah McCorkle was a close friend. After the Berlin concert, we saw her in New York at least once a year. But there was a dark, depressive side within her. According to her biographer Linda Dahl, it was reasoned by "a bipolar disorder that ran like a terrible red thread through her family", which she kept a secret from her friends. On May 19, 2001 at Upper West Side, New York City, Susannah committed suicide by throwing herself from her apartment window on the 16th floor.