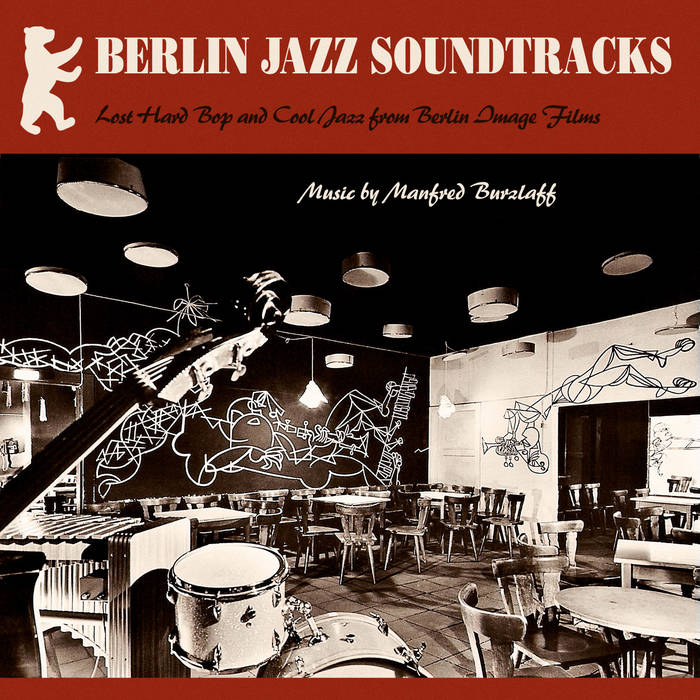 Previously unknown hard bop and cool jazz from Berlin Image Films of the 1960s, transferred from the original master tapes. All music by composer, vibraphonist and pianist Manfred Burzlaff (1932-2015), a true master of harmonies, inventing improvisational concepts and experiments somewhat comparable to the famous style of the Clarke-Boland Sextet. Burzlaff was one of the best European vibraphonists and a great arranger, which is not just a sentence being said because he doesn't live anymore! Vinyl-LP exclusive & digital, with unseen photos and nice obituary by Tatjana Wulfert.

Incredible today: Standing on a stage with Chet Baker in the late 50s when he still had his James Dean face. Jamming with Art Farmer, Dexter Gordon, Jim Hall and Lionel Hampton, who takes Manfred Burzlaff's mallets in his hands and plays on Manfred Burzlaff's vibraphone. Bebop, Hard bop. Rich harmonic schemes, improvisation, furious playing, nervous, metropolitan. Faster and rhythmically freer than the swing music he has played before, although Glenn Miller became a sensation for the German jazz lovers, especially for Manfred Burzlaff. Now, in May 1945, one no longer has to endure march music, no staccato goose-step, no songs of perseverance, no Wagnerian pomp. One can turn on the radio, tune in to one of the American channels and then listen to this new music called Jazz ... just like that. Jazz, which was hated by the Nazis, for whom twelve-year old Manfred Burzlaff had to perform in front of military audiences, with his excellent accordion and piano skills.

After listening to Glenn Miller, Art van Dam`s music on a vibraphone is another key moment. And then, a little later, Lionel Hampton "topped all previous experiences," as Burzlaff points out. Being 20 years old, he studies music at the conservatory and switches to the vibraphone, a percussion instrument similar to the marimba, except that the plates are not made of wood, but of a hard metal alloy. Now he starts to perform. "At that time smaller combos grew like mushrooms out of the ground. That's when the TABU venues came into being, a club chain where jazz was played, from nine in the evening to five in the morning. Playing there felt like slave labor. One evening maybe half an hour off. It was far from secure, and money was extremely short."

The Germans are keen to perform with the Americans. After concerts of American bands, the musicians usually gather together at the “Badewanne” ("bathtub"), a legendary club at Nürnberger Straße, where there was a tub filled with champagne, not water. Even Louis Armstrong is said to have climbed in. One evening there is a guy in the audience, Jacques Loussier, a Frenchman with a notion of jazzing up Bach. He is responsible for booking Manfred Burzlaff's band into a Parisian club without many words. Suddenly Paris. They are all really there: Chet Baker, Stan Getz, and Manfred Burzlaff is allowed to stay there for a full year. He is discovering the music of Milt Jackson, one of the greatest vibraphone players of all time. He copies him, at first, getting better and better. Usually he uses two mallets. But one day he has to work with an incompetent piano player and takes four mallets to replace him. That's the turning point: "I did not imitate Milt Jackson any longer."

When he stands there, in a suit, with cufflinks and handkerchief, bent over his instrument, striking the plates, using the pedals, with sensational speed, highly dynamic, a master of harmonies, the layering of sounds. Even at eighty, suffering now from serious illness, from cancer, but still with that feverish energy. In the middle of the night, he might call a musician from his band and say, "Listen, I've got something here," finally playing over the phone. He is one of the best vibraphonists in Europe, which is not just a sentence being said because he doesn't live anymore.

But it's not just about intoxication, feeling, spontaneity. Improvisation is not an unrestrained digression. Manfred Burzlaff is more of an intellectual guy, inventing improvisational concepts and experiments. He meets the film producer Hansjürgen Pohland. "I need a soundtrack," he says, and Manfred Burzlaff replies, "I've never written one." - "Then you'll write one now." Then he composes his first soundtrack for the short film "Schatten", which is awarded with the “Berliner Kunstpreis” (“Berlin Art Award”) , Now he gets more jobs like that, for more than 40 films. Among them are not only cultural highlights but also movies for sexual education or commercials. One, however, produced for the fashion house “Max Knaak”, makes it to the advertising film festival in Cannes. At least he is earning a little with these soundtracks, on top of his small concert fees .

He often performs at "Old Eden Saloon", a jazz club owned by Rolf Eden, founded long before Eden`s glamorous discoteque at Kurfürstendamm. He jams every night with Albert Mangelsdorff, with Pony Pointdexter and with Art Farmer as a permanent guest. One time someone drops LSD into his drink, another time he carries Chet Baker on his back down from the stage, or a guy from the audience comes up, sticks a hundred-Mark bill to his forehead and asks him to play a very special tune. Eventually, the "Old Eden" closes and everyone moves on. Manfred Burzlaff begins to teach at the HdK art school (Hochschule der Künste) and the music school Berlin-Neukölln, builds up a mallet group, writes articles for specialist magazines, works as a lecturer in Stockholm, founds the ensemble "Mallets Ahead", composes and plays and plays and plays.

All tracks composed, arranged and produced by Manfred Burzlaff,
except A3 composed by Cal Tjader, B3 traditional and B4 composed by Hank Mobley.

Previously unreleased soundtrack music from promotional films for
the city of Berlin, mostly recorded during the early 1960s at Audio Tonstudio/ Ostpreussendamm and at other unknown studios in the western part of town.
Line-ups of musicians and groups unknown, all music transferred and carefully restored from magnetic master tapes discovered in the private archives of Manfred Burzlaff.