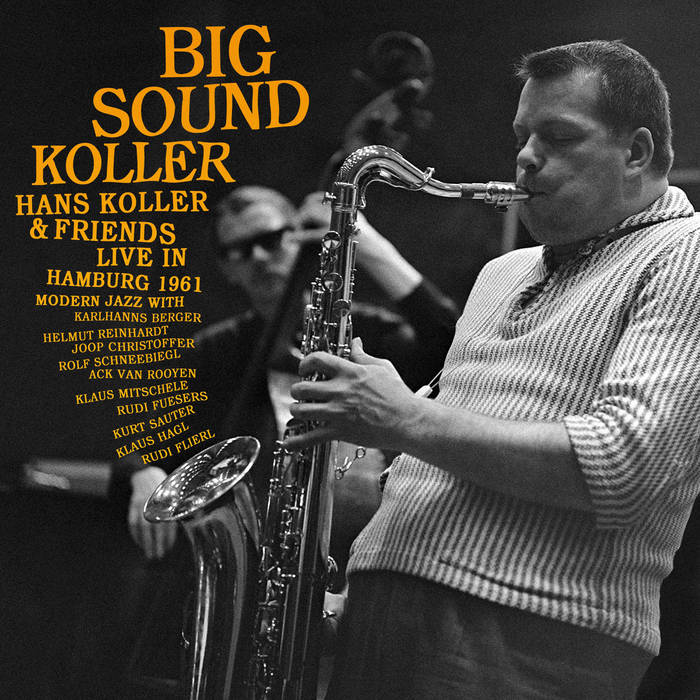 Hans Koller is considered to have been one of the most important European postwar jazz musicians of the 1950s and 60s. Born in Vienna in 1921, following WWII Koller emerged as a talented musician that had developed his own unique sound on the tenor saxophone and who was inspired by many of iconic American jazz musicians. By 1953, he was touring with Dizzy Gillespie, and in 1955 he was featured as a guest soloist in Bill Russo’s band. That same year, he also played with Lee Konitz and Stan Kenton. In 1957, upon meeting American arranger, composer and SWR big band leader Eddie Sauter, he was so impressed with Koller that he even hired him to play with his orchestra. In 1958 he went on to play with Zoot Sims and also Benny Goodman.

Koller had quickly gained a name for himself in the late 1940s, and was so popular with American jazz fans and musicians that even his very first record as a leader on the “Discovery” label in 1952 was released in the USA and not in Europe. It featured Jutta Hipp and was entitled “Hans is Hip”. Yet as much as Koller was inevitably appreciated by and enjoyed playing with the Americans, he had a distinctly European edge. And it was between sensitive improvisation and complex compositions that Koller managed to develop and find his own European sound. “It was part of the fascination, actually, even the enigma that was Hans Koller,” wrote jazz critic Werner Burkhardt, “that he began to cut the cord from America in an almost paradoxical way. He really took the first step to emancipation, without showing off. Without any robust bravado. He put his faith in a lyrical sound, in the sound of the introverted.”

Featuring his own combos that also included American musicians like Oscar Pettiford and Kenny Clarke, Koller played in the workshops of NDR Radio in Hamburg. Producer Hans Gertberg organized the workshops, giving musicians from different nations the opportunity to play together. Between 1958 and 1965, he was invited to lead workshops several times, and the 17th workshop was held on January 27, 1961, with Koller again as leader. “The concert at the NDR in Hamburg was my last set with Hans,” piano player Karlhanns Berger remembers. “I had started playing with Hans in 1959. The piano chair in his band was most coveted since only Hans and Albert Mangelsdorff were touring internationally at that time. Hans’ former piano player Dr. Roland Kovac had left the group and I was surprised when Hans gave me a call to join, because I was just a youngster, only 25 years old, and unknown, although we had played together at the Cave in Heidelberg. In 1960, we had played in Antibes, where he’d won first prize, and in Paris, too. We also were the opening act for Mingus and Miles Davis, when Miles played in Karlsruhe with Coltrane.“

At the NDR in Hamburg, Gertberg usually expected new material. For Karlhanns Berger, it was the first time he had ever really composed anything. In the set, he contributed “Homer’s Concert” featuring him in a trio with bass and drums and percussion only, and “Monkey” where he plays a fine solo. “That piece was inspired by the specific rhythms and tunes of Thelonious Monk. Gertberg liked that tune and picked it for the brief TV appearance where he also interviewed me on camera. That was the same evening as the concert took place. Hans was angry about this because he always wanted to be in the center of everything and didn’t like it if someone else was more successful than him. He was a very generous man and always paid us very well, but he was also very dominant. No one ever told him what to do. He was over the top and larger than life. You always had to stay in the background so that he could play his solo. That’s also why he preferred to play in a quartet with rhythm section, and not in a quintet. There was no other soloist. He was the leader and the other musicians only filled the gap when he wasn’t playing. But his playing was really amazing. There was no one else in Germany who played like him; well, actually, he was from Austria.”

The music on this album is being released here for the first time. In addition to his classic quartet, Koller also invited six brass players to the set, making arrangements sound more colorful and rich. “Hans wrote a lot for orchestra; he liked to do this,” remembers Klaus Hagl, his drummer at the time. “For the concert in Hamburg, he asked a few of his friends that were playing in Kurt Edelhagen’s big band to join him. He picked exactly those brass players that he needed for his background sound and we rehearsed for two days. Hans always wrote his compositions that way, placing himself in the center, because for him, it was always about the Hans Koller Sound.” In addition to Koller, the other soloists that evening included Karlhanns Berger and a guest from the Netherlands, Ack van Rooyen. At the time a youngster of merely 21, he opened the ballad “Lonely“ with a beautiful solo, playing a muted trumpet. Koller then joined, also playing a solo, and then afterwards Rooyen took over again. In the end, the piece culminated with them playing the melody together again. As Van Rooyen remembers, “Hans and I were close friends and played together on many occasions in different cities. He was a great after-hours entertainer and drank and smoke a lot.“

Koller wrote most of the compositions himself. “Instead of extending his repertoire, Hans had five or six harmonies in mind and he would write different melodies on top of these,” Berger remembers. “It was easier for him to improvise by doing this because he already knew the changes. In doing so, he made it both easier for himself and also for the audience to follow him. I think he had a lot more success working this way than if he would have had to come up with something new all the time.” Koller considered himself as someone who was continuously improving, saying,“If a jazz musician goes on playing the same thing he played thirty years ago, then he’s just playing thirty years worse. In jazz, stagnation means regression.”

Two months after the concert in March 1961, reviewer and critic Friedrich Dück of the magazine Jazz Podium enthusiastically described his experience of this “powerful and intelligent” music: “Koller is, without doubt, the dominant personality in the group. His powerful blues horn reveals the vanguard of the hard-bop hurricane that has driven the German jazz scene. All the solos on this evening exhibited real honesty, straightforwardness and musical imagination. Yet it’s really difficult to choose just one musician and to highlight anyone especially…. This jazz workshop featuring Big Sound Koller was a real sensation. This is what jazz sounds like when good musicians are given the chance to play in the way that they want. And this music really swings!”

Tracks 11 and 12 are extra tracks, available on CD version only.