Blues In My Mind 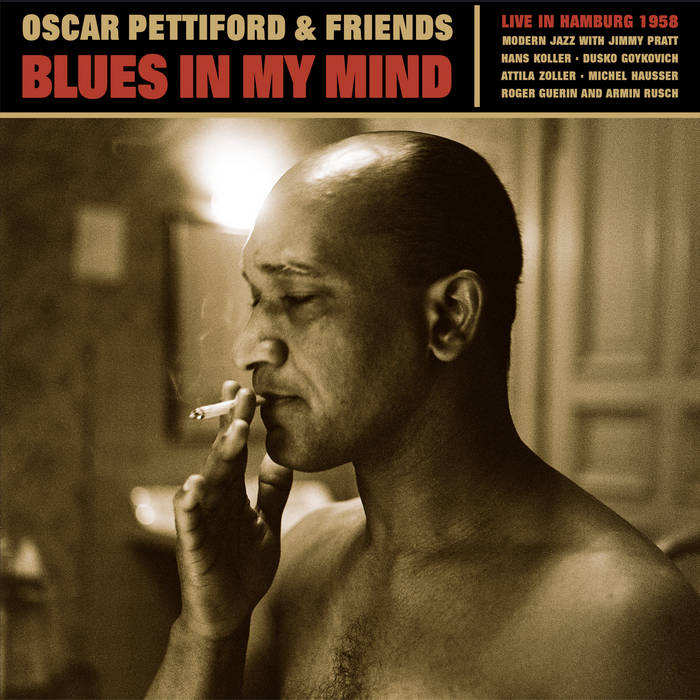 Oscar Pettiford, born September 30th, 1922 in Okmulgee, Oklahoma, grew up in a musical family with ten siblings. When he was 14, Duke Ellington heard him play the bass at a jam session and wanted to hire him right on the spot, but it was against the law: Pettiford was too young. Only years later, when Ellington’s regular bass player Jimmy Blanton had died early in 1942 of tuberculosis, Pettiford joined the band in 1945 and stayed for three years. He moved to New York and was jamming at Minton’s Playhouse with Charlie Parker, Dizzy Gillespie, Thelonious Monk and Max Roach, developing a new style that later came to be called bebop. With his individual style of playing, along with Charles Mingus, Pettiford became the most influential bass player of his decade. He is also known to be the first player who introduced the cello to jazz.

In September 1958 Oscar Pettiford came to Europe for the first time with a show entitled “Jazz From Carnegie Hall”, organized by Harold Davison. The all-star band included J. J. Johnson, Kai Winding, Zoot Sims, Lee Konitz, Kenny Clarke, Red Garland and Phineas Newborn, touring England, Netherlands, Sweden, Denmark, France and Germany, where they played in Berlin, Cologne, Stuttgart, Frankfurt and Hamburg. Dusko Goykovich, who had left Yugoslavia in 1955, was living in Frankfurt at the time and remembers: “After the show all the musicians came to a jam session down in the Jazz Cellar and that is where I first met Oscar. He was a wonderful guy with a great sense of humor and a deep voice. But Oscar was also very tall and strong. After the session he carried everything by himself, his bass, his amplifier, walking up the stairs from the Jazz Cellar. I was so tired after the session, I could have never done that, but he did it!“

The 1958 tour of “Jazz From Carnegie Hall” was a big success and Pettiford could hardly believe the enthusiasm they received for their music in Europe, so after the tour was completed he decided to stay on the continent and rented an apartment in Baden-Baden. In the meantime, producer Hans Gertberg of Norddeutscher Rundfunk in Hamburg had started to pay attention to the talented bass player and invited Pettiford and his quartet for a concert (the so-called Jazz Workshop) on November 14th, where he played with Hans Koller, Attila Zoller, Kenny Clarke and some guests in Studio 10 (already released in June 2015 on CD and LP: “We Get The Message”, Sonorama-90). The concert was so well received so that Gertberg invited Pettiford again the next month for Jazz Workshop No. 3, playing on December 22nd, but with a slightly different group. One guest soloist at the gig was Dusko Goykovich: “Hans Gertberg had asked me to join Oscar’s group. We had three days of rehearsal, but with such professional players, one day only would have been fine too. Oscar was not only a great player but also a wonderful composer. I was very proud to play with him. For me, he was one of the best bass players I had ever worked with!”

That December evening, Pettiford’s group played compositions that were a fine mélange of modern mainstream and cool jazz but also hard bop, featuring the composition “Moanin’”, written by Bobby Timmons for Art Blakey’s Jazz Messengers. In the song “H. E. C. Blues”, Pettiford briefly plays the melody of Jingle Bells in his solo, since it was christmastime. The day after the concert, the newspaper “Hamburger Abendblatt” wrote in a review: “Michel Hausser from Paris showed his proficiency on the vibraphone, and the basic group members Koller, Zoller and Pettiford really got along very well musically with the new rhythm section, including Jimmy Pratt on drums and Armin Rusch on piano.“

The concert is now issued here for the first time, as are the four accompanying photographs by Susanne Schapowalow. She was born in the same year as Pettiford and became known as photographer who got very close to her subject matter. Schapowalow didn’t shoot too many pictures of musicians on the stage, instead being more interested what happened in the backstage area and in other private settings. Supported by Hans Gertberg, she gained access to take pictures during the rehearsals at the Jazz Workshops in Hamburg, and this is where she met Pettiford. The two hit it off quite well, and Schapowalow took him to experience the Christmas market at Heiligengeistfeld, where he had fun riding a motor scooter with her daughter, Natascha. Schapowalow was also allowed to take a few pictures in Pettiford’s hotel room, where he was sitting, smoking and transcribing music.

Michel Hausser, whose composition “Blues In My Mind”, “Rue Dauphine” and “H.E.C. Blues” were featured in the concert, remembers that the last rehearsal was always recorded, and then during the concert, they would let that recording run parallel but silent to the live concert, so that in case something unexpected would happen, they could switch to the tape. “But that concert night, they didn’t do that, even if there was a wired moment: Oscar also played his cello for some tunes and he had a small amplifier with it. But then the amplifier broke and he angrily kicked it off with his feet and switched back to his regular bass.“

Once the Hamburg concert was over, Pettiford and Koller were in a rush because they had a concert in Vienna coming up the following day. Dusko Goykovich remembers: “A few hours later, they had this terrible car accident. Obviously, I was happy that I had been dropped earlier”, Pettiford had bit his tongue through and had to stay longer in a Vienna hospital than Koller. After recovering somewhat, however, he soon started playing again, and in January 1959 he recorded with Hans Koller in Vienna, who said about Pettiford: “It was Oscar who made me understand what it means when American musicians keep saying: ‘When you play your instrument, you’re telling a story’”. Pettiford continued traveling, playing concerts in Paris, Cologne, San Remo, Berlin, Stuttgart, Essen and Baden-Baden, always with his idea in mind “to pass on the message.”

In summer 1959, Pettiford moved to Copenhagen, where he played at Café Montmartre with Stan Getz, Don Byas and Jan Johansson. In February 1960, his wife Jacqueline gave birth to twin girls, that they named Celeste and Cellina. His last album “My little Cello” was dedicated to his son, whose name was Cello. He played his last concert September 4th at the opening of an art exhibition in Copenhagen and shortly after fell into a coma. He passed on September 8th, 1960, aged only 37, succumbing to a virus closely related to polio, and perhaps the lingering effects of the car accident.

Arne Reimer (excerpt from sleeve notes for “Blues In My Mind”)

Recorded December 22, 1958 in Hamburg at Studio 10,
produced by Hans Gertberg