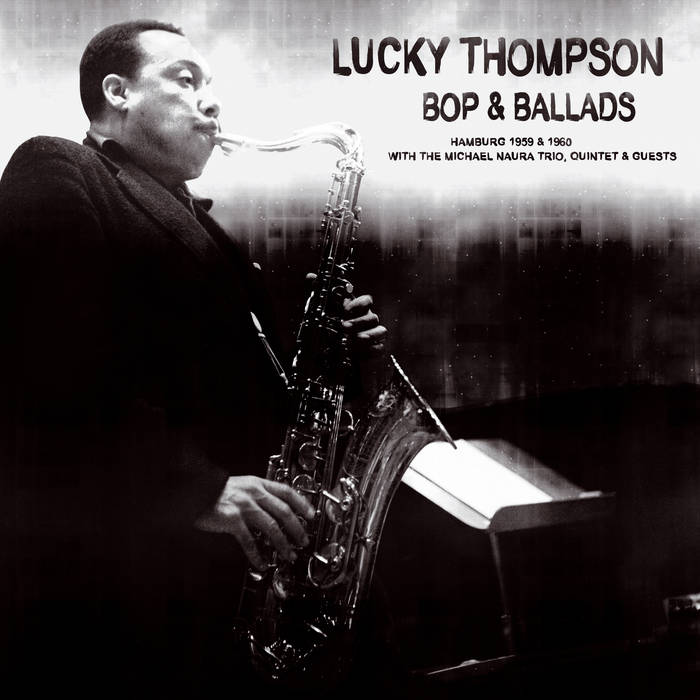 Newly discovered sessions released here for the first time: Ten recordings by one of the greatest saxophonists of his generation, American jazz master Lucky "Eli" Thompson with the Michael Naura Trio, Quintet and guests in Hamburg 1959 and 1960. Small and larger group improvisations with the melodic sound of Lucky on tenor and soprano sax, featuring Heinz von Moisy, Hajo Lange, Jimmy Gourley, Wolfgang Schlüter and Hans Koller. From hard bop to soft ballads, all light, fluffy, intimately personal and with a lyrical bebop approach.

"Lucky was a hell of a saxophone player" (Miles Davis)

“The music, all written and arranged by Lucky, is melodic and intimately personal. He is a melodic improviser; and jazz is rooted in song: its vox humana aspect (…) is the magical ability of an instrumentalist to bend his horn to shape the artist`s needs, to make it an extension of his own, personal voice. It is a magic at which Lucky is a Merlin.”
(David A. Himmelstein, sleeve notes for “Lucky Strikes”,
Prestige Records 1964)

Needless to say, Eli “Lucky” Thompson is considered one of the foremost saxophone players and arrangers in modern jazz. Already in 1956, in a press release for Savoy Records, H. Alan Stein described him as “one of jazzdom’s most underrated and under-recorded tenor sax stylists”. Thompson started during the swing era and played in the big bands of Jimmie Lunceford, Lionel Hampton, Count Basie and Billy Eckstine, working alongside with Dizzy Gillespie and Charlie Parker, who both again played with him in 1946 on a landmark recording session of Parker for Dial Records when bebop was invented: “Mr. Thompson connected the swing era to the more cerebral and complex bebop style. His sophisticated, harmonically abstract approach to the tenor saxophone built off that of Don Byas and Coleman Hawkins; he played with beboppers, but resisted Charlie Parker's pervasive influence. He also played the soprano saxophone authoritatively.“ (Ben Ratliff, New York Times)

In May 1952 Thompson recorded with Thelonious Monk for Blue Note and in April 1954 took part in a recording session with Miles Davis for his album “Walkin’” on Prestige. In his autobiography, Davis mentions that he learned about improvisation from Thompson and adds: “Lucky was a hell of a saxophone player. (…). I got J. J. Johnson and Lucky Thompson for that session because I wanted that big sound that both of them could give me.” The first time Lucky Thompson visited Europe was in 1948 as a guest artist at the first Festival International de Jazz de Nice in France, playing in a group with Bobby Jasper, Jacques Pelzer, Fats Sadi, Toots Thielemans and others. Having lived and worked in Los Angeles and New York, Thompson was very outspoken about the unfair power of the music industry executives and the jazz business that he had difficulties dealing with. In order to escape these “vultures” as he called them, he moved to Paris in February 1956 and two months later embarked on a European tour with Stan Kenton.

Hans Gertberg invited Lucky Thompson several times for the so-called “Jazz-Workshop-concerts” at NDR (Norddeutscher Rundfunk in Hamburg). In April 1959, he played with the German quintet of Michael Naura and guest musicians Hans Koller, Georges Grenu (from the Parisian orchestra of André Hodeir) and Helmut Reinhardt at Studio 10. The drummer was Heinz von Moisy who remembers: “I worked with several american Jazz musicians in Germany. In Berlin I played with Carmell Jones in a club that was entitled 'Badewanne' and in Stuttgart I played with Eddie Harris. When Hans Gertberg invited me to the Jazz Workshop in Hamburg in 1959 to work with Lucky Thompson I was looking forward to it, because his solo on Miles Davis` record ‘Walkin’ was one of the most beautiful I had ever heard. It was obvious that he was playing on a higher level than we did, very confident.”

On alto saxophone was Klaus Marmulla who also remembers: “I was part of the Michael Naura Quintet and we always worked in clubs for one month and then we would travel on to the next city. In Hamburg, we were playing in a bar that was located in a cellar called 'Barrett', at the Colonnaden. We were friends with Hans Gertberg who invited us to play with Lucky Thompson at the Jazz Workshop at Studio 10 where we rehearsed for a few days. Thompson played with a very soft and beautiful sound on his instrument, almost in the style of Stan Getz.“ In “Loverman”, for example, Thompson starts out improvising with a chorus that is based on the theme. In the second chorus the piano drops out, and Thompson plays with a double time feel solo, but bass and drums are not following him, which creates a very relaxed feeling. Then the piano of Naura sets in again in the last A section, and the piece ends with a beautiful solo cadenza from Thompson.

The concert was reviewed in the following June edition of German magazine “Jazzpodium”: ”In addition to the tenor sax, Lucky Thompson also played the soprano sax. His sound on the soprano sax was similar to that of a flute, playing in a very restrained way, without vibrato and in some respects reminiscent of the way Tony Scott handled the clarinet. Thompson’s tenor performance on 'Cherokee' was a nod to Lester Young, both in terms of sound and style. Alt sax player Klaus Marmulla played with a sense of nuance and expression while the technique and imagination of Wolfgang Schlüter was more than impressive, to say the least. The bouncing rhythm section was filled out by Michael Naura rendering his Count Basie influences, Hajo Lange with his beautiful, full bass sound and the spirited but controlled Heinz von Moisy on drums.“

Gertberg enjoyed the concert and one year later invited Thompson back to Hamburg. At this concert, Thompson played his composition “Brother Bob” in a trio, that starts off with a groovy theme in a nice mid tempo that was perfect for a walking bass, played by Hajo Lange, who also has a solo over two choruses. In this tune, Thompson shows his remarkable intonation and facility on the soprano saxophone, that he had purchased in Paris in 1957. Another review from “Jazzpodium” (June edition 1960) about the concert on April 22, 1960: “Less than a year ago, Lucky Thompson took the stage on both tenor and soprano sax. When it comes to style, he clearly hasn’t changed a bit in the interim – maintaining his distance from the Hawkins-Berry school that often criticizes him, instead approaching the style of Lester Young, exhibiting a preference for fast-paced themes on the tenor, flute-like nuances on the soprano, with subtly restrained, sweeping, swinging choruses underpinning it all. The audience could clearly sense that for Michael Naura, this performance had nothing to do with fashionable novelties, but rather the artistic effort in expanding the realms in which jazz moves.”

Thompson left Paris again in 1962 and recorded his most famous album "Lucky Strikes" in 1964. In addition to family problems, he continued having issues with the business and subsequently moved to Lausanne, Switzerland, residing there from 1968 to 1970. Back in the States, he later made a few recordings but due to a chain of difficult circumstances ended up homeless and ultimately in a nursing home in Seattle, where he passed away in 2005. These newly discovered sessions, published here for the first time, are all Lucky Thompson … light, fluffy, pretty, and with a lyrical bebop approach. Thompson himself once said about music in “Downbeat”, July 4, 1963: “As far as I’m concerned, every note in a solo must mean something. All the strands of sound and rhythm must be tied together and make for a stimulating, informative picture.“