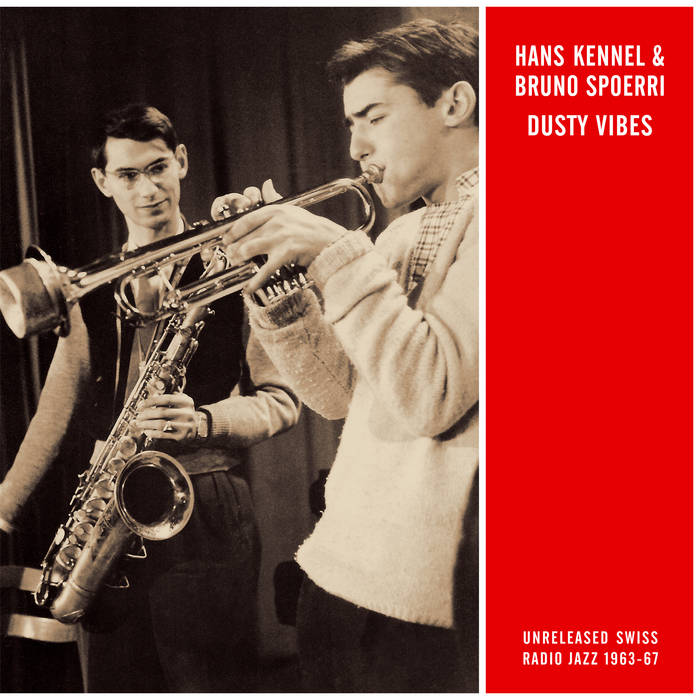 The "Hans Kennel Quintet" and "Bruno Spoerri Allstars": Nine progressive, unreleased slices of hard bop and modern jazz by the Swiss artists Hans Kennel (trumpet) and Bruno Spoerri (saxes), with Remo Rau, Joel Vandroogenbroeck, Hans Foletti, Alex Bally and others, produced between 1963 and 1967 by Radio Zurich. Transferred from tapes found in the archives of the Swiss Broadcasting Corporation (Radio DRS), including own material plus compostions by Charles Mingus and Ornette Coleman. Careful sound restauration, comes with new liner notes and photos.

These unreleased recordings were made in the years 1963 to 1967 and have been transferred from original tapes found in the archives of the Swiss Broadcasting Corporation (Radio DRS). At that time Radio Zurich produced some hard bop and modern jazz sessions for broadcasting purposes, with different formations around the two jazz musicians Hans Kennel (trumpet) and Bruno Spoerri (saxes) - the "Hans Kennel Quintet" and "Bruno Spoerri Allstars". They come from a time when the musicians emancipated themselves from a mere imitation of American originals, step by step. For the first time the best takes – original compositions and pieces by a.o. Ornette Coleman and Charles Mingus - have now been restored and compiled under the title "Dusty Vibes" for this release on CD and LP.

Hans Kennel was born in 1939 in Schwyz and entered the Zurich jazz scene with performances at the local jazz pub “Africana”. Already in the late 1950s, he appeared there regularly with musicians such as Remo Rau, Irène Schweizer and Bruno Spoerri. At the conservatories of Zurich and Fribourg Kennel studied trumpet, and later also at the prestigious Berklee College of Music in Boston. He first established himself as an excellent hard bopper, with first prizes at the Zurich Jazz Festival and other awards, before he played and recorded with various jazzrock bands during the early 1970s. Hans Kennel later turned to the specific expression of Alphorn or Büchel and returned to the roots of Swiss folk music. To date, he leads and composes for various "natural horn" ensembles, that combine folk melodies and jazz tunes in an intelligent way.

Bruno Spoerri earned his degree in Applied Psychology in 1958, after he had already played Saxophone in various bands as a student (including the Modern Jazz Group Freiburg). From 1957 to 1975 he belonged to the Zurich "Metronome Quintet" with which he toured internationally and recorded several Albums and EPs. In the 1970s Spoerri became musical director of the jazz festival Zurich several times and has performed with many international jazz greats. Back in 1967, he began to experiment with electrified saxophone, effect units and Ondes Martenot, and went deeper into the electronic music scene through the purchase of an EMS VCS3 synthesizer. To date he still works as a freelance composer, sound engineer and author (editor of "Jazz in Switzerland" / Chronos Publishing). At present, Spoerri deals primarily with the interactive potential of electronic music equipment.

"The recordings of February 1963 present the original Hans Kennel Quintet, as it performed in those years almost every week at the jazz pub Africana in Zurich. Already in mid 1962, I arrived in Zurich and joined the Africana Band of Hans Kennel and Remo Rau after a short time. Japan-born pianist Rau was the driving force behind the Africana. It was him who found and arranged the wonderful theme tune Hadaka No Shima (English: The Naked Island). I originally wrote Dusty Vibes for the Metronome Quintet, for the vibraphonist Ueli Staub - hence the title. Back then some friends occasionally called me ´Blue Note` - we were all Blue Note fans.

The Messengers, Art Blakey, Horace Silver, Thelonius Monk were our role models, also - in a cautious approach to the still rather traditionally oriented pieces from his early days - Ornette Coleman. During this time we discovered the first LP by Coleman and took several titles from it at once (When Will the Blues Leave). Single, still quite tentative excursions into freer realms have been tried. The first opportunity came as an unexpected order to write the music for a jazz and poetry program. The poems of Zurich based poets had speech rhythms that did not fit into the usual four-four scheme, resulting in pieces such as the Eleven Beat Blues, recorded in December 1963.

The Bruno Spoerri Allstars were formed in 1965 for a ´Jazz in Basel` concert. The Belgian pianist Joel Vandroogenbroeck lived in the city and played with many jazz groups, including Oscar and Miriam Klein. He had already established himself on the scene as a sideman for Jacques Pelzer, Bobby Jaspar and Zoot Sims. Three years later, Vandroogenbroeck founded the psychedelic group Brainticket. The Allstars also included the German Karl Theodor Geier, who had studied at the Conservatory of Fribourg and worked as a very reliable bass player at the time. Moanin` is the piece by Mingus (not the title by Timmons) and Vandroogenbroeck`s own composition Septet Piece may be unique in this form.

A second order for the Hans Kennel Quintet led to ´jazz, poetry and projection` in 1966 with lyrics by Franz Wurm. In concert the speaker was Kurt Beck, replaced by Gert Westphal for the radio recordings in 1967. I had the crazy idea to build the whole theme of this production on a twelve-tone row, but that was then treated very freely. Another novelty has been the use of the electronic instrument Ondes Martenot (and I think the first time in the field of jazz). I had purchased the instrument in 1965 and used it primarily for film music business. "

In 1969, Hans Kennel and Bruno Spoerri played within a sextet as the local act at the prestigious Montreux Jazz Festival. The musical magic moments of the Africana, however, were over. In 1966, due to the new beat-wave, the public response was gone and the "Modern Jazz Association Zurich" was launched as a substitute, with regular evening concerts in a location called "Hinteren Sternen". But the new organization could not stand the fading interest in playing styles such as hard bop, modern or free jazz for long. In the late 60s, many of the Swiss jazz musicians became dissatisfied not only because of the declining audience numbers but also from their own music. They consequently opened the electrified jazzrock chapter (with role models such as Herbie Hancock, Gary Burton and Tony Williams), on electric guitar, electric piano, synthesizer, and clavinet. Especially Hans Kennel and Bruno Spoerri served as an engine for this development in the 70s with bands like "JRE" (Jazz Rock Experience), "Magog", "Jazz Container" or "Jazz Community". But this will be documented elsewhere in detail.