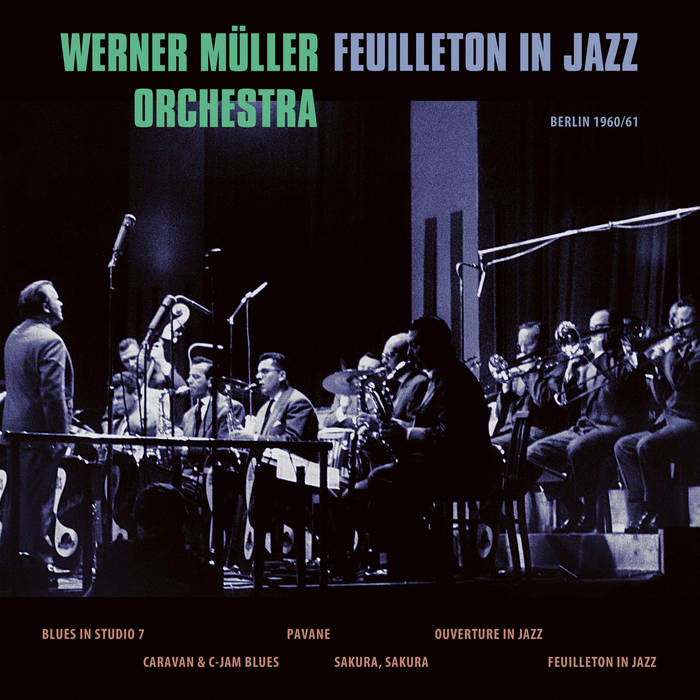 Symphonic Jazz at its finest and a rare musical find from post-war Berlin. Unknown performances of the orchestra under the direction of Werner Müller, recorded April 1960 and September 1961. Excellent crossover of Westcoast, Hard Bop, Modern Classical and Blues. Most of the tracks composed exclusively for the occasion, such as “Blues In Studio 7” (Helmut Brandt), “Ouverture in Jazz” (Klaus Wüsthoff) and “Feuilleton in Jazz” (Peter Sandloff). Another exciting new chapter of Progressive Jazz in Germany. Exclusive 10inch vinyl LP & Digital featuring Müller`s most advanced recordings.

This album documents the rare, unknown performances of the Berlin based orchestra under the direction of Werner Müller (1920-1998). The recordings took place on April 22nd 1960 and September 29th 1961. A mere six weeks before the start of the building of the Berlin Wall. Müller had been working in the western part of town for over thirteen years. His orchestra performed the popular dance music of the day where progressive Jazz was unheard of. Therefore, the "Feuilleton In Jazz" presented here for the first time, stands out as a rare musical find. The recordings shows that Müller and his orchestra had something else to offer, namely an excellent crossover of Modern Jazz, symphonic classical music and contemporary avant-garde. Their music is a rich mixture of Westcoast Jazz, Hard Bop, Modern Classical and Blues. Similar to the sounds of Duke Ellington, Stan Kenton and Bill Holman.

The Golden Age of German-American relations and the career of Werner Müller began in 1948. The year of the Berlin Blockade and the American Airlift. It is "Zero Hour". The beginning of the second chapter in German Jazz history. Shortly after the currency reform, bandleader, composer and trombonist Müller is entrusted with the foundation of the so-called “RIAS-Tanzorchester“ (RIAS Dance Orchestra), which he directed for nearly twenty years. RIAS is an abbreviation of "Radio in the American Sector" and its broadcasting house, located in Berlin-Schöneberg. The programmes of the propaganda station were approved and subsidised by the American occupation power. Light Jazz was part of the denazification process and the re-education policy, to retrain the German mind.
Some of the finest German Jazz musicians are in the orchestra, such as clarinettist Rolf Kühn, guitarist Arno Flor, and later the renowned baritone saxophonist Helmut Brandt. Brandt also arranges and composes for the formation.

The Cold War begins, with West Berlin as a democratic island of freedom, beyond the Iron Curtain. Chewing gum, Swing music and Lucky Strike are in heavy demand. In 1949 The Federal Republic of Germany is founded. It is the start of the conventional Adenauer era that will last until 1963. Werner Müller is known nationwide, with his light blend of swinging brass and string textures. The RIAS Dance Orchestra participates in numerous German entertainment films and accompanies famous singers such as Caterina Valente, Rita Paul and Bully Buhlan. During the 1950’s, there were no major musical developments with the orchestra. The Jazz Pop and Easy Listening sound that they played is known to be some of the finest examples of both genres. They gain momentum and chart in the US. International tours take the orchestra to many countries including Japan. A special combination of four trumpets, four trombones, five saxophones, four rhythm instruments and eighteen strings are responsible for their sweet trademark sound. However, German Jazz music continued to evolve.

During the 50‘s, American Jazz composers such as Bill Holman, Max Roach and Bill Russo explore the influence of dance music, calling on Bach, Brahms and Dvorak. They combine Jazz with symphonic classical music, folk tunes and 12-tone serialism. During this period, a few similar activities in the German Federal Republic were taking place. A native protagonist Rolf Liebermann, then director of the “Hamburger Staatsoper“(Hamburg State Opera) and head of music at the Norddeutscher Rundfunk (North German Radio/ NDR), started something new. In 1954 he received a composition mandate for an orchestral work to be performed at the festival “Donaueschinger Musiktage “. The premiere of his "Concerto for Jazz band and Symphony Orchestra" is heavily criticised by the press. Today, this piece is considered one of the first works to be associated with the terms "third stream" or "crossover". Two years later John Grass presents his "Jazz Symphony No. 1" in Stuttgart, played by the "German Festival Symphony Orchestra". A big band, string group and a Jazz septet were based around the featured young pianist Horst Jankowski. In 1958 a recording of the concert was released in the U.S.A. with printed slogans such as "International Premiere in Jazz" or "International Presentation in Modern Jazz". Kurt Edelhagen and his orchestra also performed the symphony several times.

The Werner Müller Orchestra continued to play these accurate arrangements. The stereotypical swing, remaining unimpressed by the recent developments. Modern Jazz did not become part of their repertoire until 1960-61. Shortly after, the re-education of the RIAS came to the fore. This period included commissions for the creation of new orchestral jazz music from the Federal Republic. Müller`s progressive sounds are played and recorded at the Hochschule für Musik, the auditorium of the Freie Universität and in the studio of the RIAS building. These commissions are composed exclusively for the occasions, by masters of crossover music such as; Robert Farnon, Klaus Wüsthoff, Julien Francois Zbinden, Helmut Brandt and Peter Sandloff. There is also an Ellington adaptation by Arno Flor, plus unique jazz versions of Gabriel Fauré's "Pavane" and the Japanese folk song "Sakura, Sakura", both sung by Caterina Valente.

Werner Müller moved to Cologne in 1966 and takes over the direction of the “WDR-Tanzorchester“ at Westdeutscher Rundfunk (West German Radio), a forerunner of the WDR Big Band. He retires in 1985. The successors of Müller at RIAS are Dave Hildinger, later Helmut Brandenburg, Horst Jankowski and Jiggs Whigham. A last appearance of the RIAS Tanzorchester`s founder takes place on the occasion of his 75th birthday in 1995, together with the RIAS Big Band in a reunited Berlin. Almost sixty years later his advanced recordings from 1960-61 are finally rediscovered. They open up a sophisticated and exciting new chapter of Symphonic Jazz in Germany.

All tracks previously unreleased, recorded 1960 & 1961 in Berlin
A1, A3, B1 and B3 recorded 22.04.1960 at Auditorium Maximum of Freie Universität,
A2 and B2 featuring the vocals of Caterina Valente recorded 28.09.61 at the studio of Hochschule für Musik
Arrangements by the composers, except otherwise noted