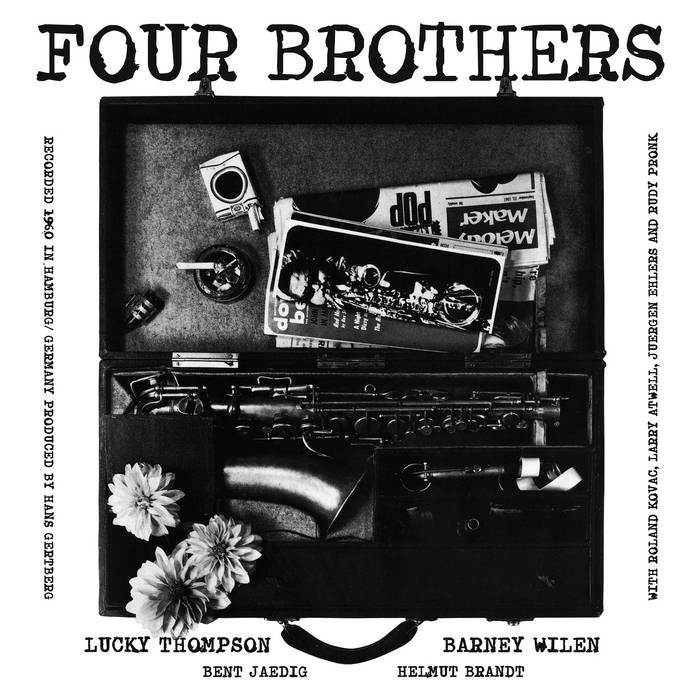 Lucky Thompson is 36 years old and the pillar of our workshop activities. I think I may say so without devaluing someone else`s work here on stage. Now, I could mention a list of his major stations, such as Count Basie, Stan Kenton, Dizzy Gillespie, Charlie Parker, not least Miles Davis, Milt Jackson and so on. We can read about it in jazz books. Some facts about what he is doing today: He composes and arranges aswell, he produces records for his fans in the United States and just now recorded an LP with Martial Solal and Kenny Clarke in his adopted hometown of Paris, alongside the young Frankfurt bassist Peter Trunk, who came to the forefront during the late 1950s.

Barney Wilen, the Benjamin of the group, is from Switzerland and 23 years old. Since participating in the prominent Newport Festival last year, he is more often mentioned among the first five or six "moderns" on the tenor sax. Born in Nice and having grown up in Monte Carlo, he used Paris as a base from which to conquer the international jazz scene, right after graduating from high school in “Seine-city”. You know that one can sometimes meet the most prestigious jazz musicians in this town. Barney has used that advantage consistently and very effectively. For four or five years he had intensive and fruitful contacts in this sense, not only with the crème of French jazz stars, but also with Bud Powell, Art Blakey, Benny Golson, Nat Adderley, Lee Morgan and many others. He stayed in the US for three months, first in Newport, as I have said before. This led him to recordings with the Jazz Messengers and, among other work, film music with the legendary Thelonious Monk.

Helmut Brandt, although not quite 30 years old, first entered the German jazz scene 12 years ago. He is also now listed internationally, with his congenial and swinging Berlin brightness, and I can limit myself to these few career stations only: First own combo in 1950, selected as best baritone saxophonist in 1958/59 by the German Jazz Poll. He is a graduate of the Berlin Conservatory. Very early, from the age of ten on, he played violin and mandolin remarkably well. He has sung in the Berlin Cathedral Choir and we really thought about producing a scat vocal track here, performed by him and choirboy Kovac. At age 16, he started on the tenor sax and has played the baritone since 1954. A year later, he played in his own combo, with which he undertook a variety of experiments to find new combinations of sounds, as his own composer and arranger of course. Brandt`s musical farewell to Jazz in 1959 has caused quite a stir at that time, though, he is still active on the scene as his performance here shows. He established his passionate hobby by the decision to earn his living in Werner Müller`s RIAS Dance Orchestra, in a leading function of course. The times in which such a decision was condemned by jazz fans, they are over.

The Dane Bent Jædig, tenor saxophonist in the Jazz Ensemble of Hessischer Rundfunk, is 25 years old, hails from Copenhagen and finds himself amidst a kaleidoscope of nationalities tonight. He spent three years in the Danish Navy as a telegraphist, very peaceful, as he points out clearly. Somewhere on a ship there was a trumpeter who made a proposal to Bent. Why not learning to play the saxophone during his free time from guard duty? He did it in 1954 and from the recordings of the big stars he greedily collected everything he could find over the years. With half a dozen shirts and a toothbrush, in the words of Bent Jædig again, he then moved from Copenhagen to Frankfurt three years ago. There he ran into the open arms of the jazz elite and played a lot of music, but without enough money to get ahead. The next stop was the University of Music in Mannheim, where he studied classical flute and all sorts of theory. His big moment came in 1958 at the Frankfurt Jazz Festival, his breakthrough or whatever you want to call it. I hear so many people talk about him, about Bent Jædig.

In 1952, Roland Kovac has crowned his intense studies in classical music with a doctoral thesis on harmonic phenomena in the piano music of the late Baroque. Already at the age of six, he sat at the piano and was taught this art by his grandmother. Later he sang with the world-famous Vienna Boys Choir and at the age of 16 he became interested in jazz, in which he seems to find the greatest creative possibilities for himself and others. The fact that he draws his avant-garde ideas and inspiration from these experiences is responsible for his image as an outsider in jazz. It did not bother him, and I think it is good that way. Namely, if one has the potential to tap into the full range of contemporary music for all occasions, then one should not be hasty to call him a jack of all trades and master of none. He is also director of the SFB Dance Orchestra.

The protégés of Roland Kovac also include Larry Atwell, our guitarist. As a musical apprentice, he has learned much in two and a half rehearsal days and nights, as he says himself. What he contributes musically, that`s precisely what Roland Kovac likes about him and already knows from earlier, occasional collaborations. The stranger, who has big plans and fulfills all the requirements to realize them as well. He should be able to join in, whereever it fits. Larry hails from Trinidad. In England he has played with the West Coast pianist Dick Katz, in Denmark with some important Basie men. Since 1956 he lives in Hamburg and the object of his yearning is a music degree, which earns him the title of Doctor.

Juergen Ehlers is 24 years old and has been perfecting his jazz skills for eight years now. In the beginning he learned to play piano autodidact, then joined a school band and won the fifth price in the piano division at the first ever Duesseldorf amateur festival. When his wish came true to study music, he visited the University of Hannover, where he majored in bass, plus piano and harmonics, both in a classical way. A lot of you might remember that he played at the Frankfurt Festival in 1958 with Karl Blume's Combo. He has been achieving great success in Dusseldorf with Bruno Lefeldt. Thanks to the commitment of Roland Kovac he recently joined the SFB Dance Orchestra. This is how he stays connected to the jazz roots.

Rudy Pronk, born in Indonesia and 29 years old, is on drums. He works as a teacher at an elementary school in a small town near Rotterdam and has developed a reputation as an idiosyncratic musician, discovered by Dr. Roland Kovac. Rudy came into contact with jazz thanks to his brother Rob Pronk, chief arranger and trumpeter in the orchestra of Kurt Edelhagen. Wallace Bishop is his favourite drummer and temporary music instructor. The Mr. teacher picks up a drum kit every weekend and sets it up in the Dutch jazz clubs.