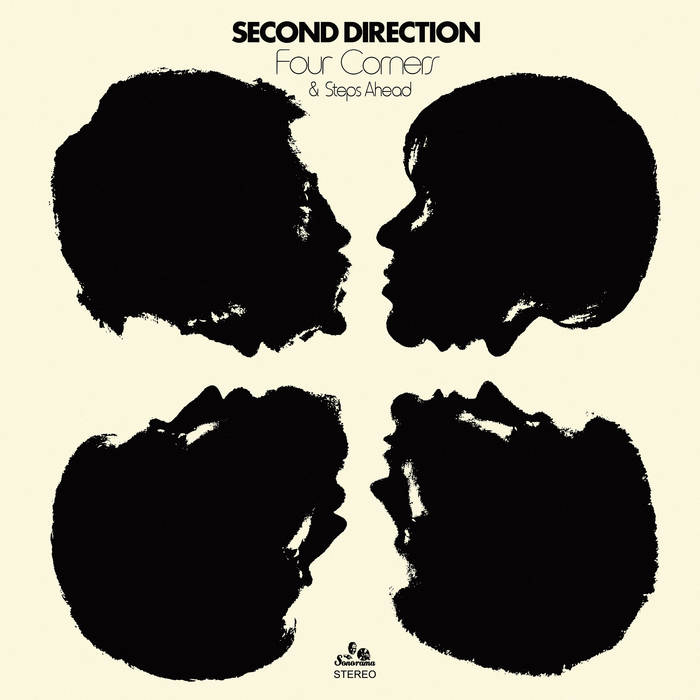 A reissue of the rare Jazz, Funk & Fusion Library LP “Four Corners“ by Second Direction. A project of the saxophonist and flutist Fritz Münzer, produced in 1976 by “Joy Unlimited” founder Klaus R. Nagel at Tonstudio Bauer in Ludwigsburg. The new release includes six additional recordings from the band’s second unreleased album from 1978, entitled “Steps Ahead“. A long play-CD and 2LP-Set, including the great Jazz Funk tracks “Steamer“, Steps Ahead“, “Keep Going“ plus the Brazilian tinged Jazz dancers “Flying Carpet Ride“ and “Four Corners”, carefully restored from the master tapes.

West Germany in the 70’s of the last century. Composer and arranger Fritz Münzer (1934-2007) is one of the country's best Jazz saxophonists and flutists. After a career in the 50’s and 60’s as a hip musician on the German Hard Bop and Westcoast scene, the man from Mannheim first refuses to establish his own band, but then forms "Second Direction". With this formation he records "Four Corners", a so called Library LP for the small publishing label "Trend Records". The album was produced in 1976 by "Joy Unlimited" founder and guitarist Klaus R. Nagel with top notch musicians at Tonstudio Bauer in Ludwigsburg. Münzer is now active behind the scenes, writing music and is heard on countless recordings for different music publishers.

Amongst connoisseurs "Four Corners" is considered one of the really outstanding Jazz Funk Fusion albums from Germany. Münzer is joined by Gerhard Spirka on electric bass, Val Hargreaves on drums, Karl-Heinz Merkel on Fender Rhodes and occasionally Jörg Gebhardt on congas. However, the finished LP did not appear in shops. It was exclusively available to broadcasters and foreign sub-publishers by Nagel’s publisher "Badenia-Vineta", for use on radio and television. Therefore, background information and visual material regarding Second Direction is missing. There is no band story, band photos or anything, with the exception of an unusual artistic designed front cover by Karl Hans Merkel. His artwork shows four stylized profile views of the musicians.

For a long time, the album remained a secret. Then, in the mid-90s, it is suddenly discovered in alternative German music clubs and discotheques. During the "Acid Jazz" revival in the United Kingdom, the dancers at Mojo, Unique and Atomic Café not only move to electronic music, but also to Jazz and Funk again. Now the "Rare Grooves" of Second Direction are on the playlists. DJ Rainer Trüby curates his internationally successful "Glücklich" compilations with European, Brazilian & Fusion Jazz of the 70’s and 80’s. In 1996 on the second volume, he presents Second Direction’s "Flying Carpet Ride". And so begins the hunt for the extremely rare LP. "High Class Fusion and Brazilian Beats made in Germany" on a level with bands such as Weather Report or Azimuth! The track is frequently played at Trüby's "Rootdown" parties and you just had to have it! In addition to the high musical quality, it is above all the rarity and obscurity of the record that makes it interesting for DJs and collectors alike around the world today.

Back in 1978. Fritz Münzer wants to deliver a second LP for Badenia-Vineta with his band Second Direction. Under the working title "Steps Ahead", it is produced at Studio 2000 in Pforzheim, with a new formation of high profile musicians. This time Münzer plays with Toni Rabold on trumpet, Pit Löw on keyboards, Chuck Tscheschner on electric bass and Peter Lübke on drums and percussion. This band also impresses with first class, danceable, Fusion Jazz. However, to the surprise of everyone, the new recordings are not taken into account and the tapes soon disappear in Nagel’s archives. A second vinyl LP is not manufactured and Münzer's project, Second Direction, becomes history after only two years. With the present Sonorama reissue these lost "Steps Ahead" sessions are released for the first time in 2018, as well as "Four Corners" produced by Klaus R. Nagel and directly transferred from the master tapes.

In the 1960’s, Nagel studies Early Music at the Mannheim University of Music and the Schola Cantorum Basiliensis in Basel. He then works as a freelance composer, arranger and musician for Film, Radio and Television. Soon after, he founded the progressive and internationally successful Jazz Rock group "Joy Unlimited" with the singer Joy Fleming. The pairing starts an intensive concert career in Germany and abroad. He is also able to bring two of his complex Jazz Rock ballets to the stage. Nagel is still active today as a bustling music publisher. During the 60’s, Fritz Münzer plays with legends such as Manfred Schoof, Joe Haider and Hartwig Bartz. In the 1980s he becomes a kind of father figure to young Jazz musicians in the Rhine-Neckar area, enjoying a reputation for playing the "Blackest Sounds” on the local scene. From 1987, Münzer teaches at the University of Mannheim and starts the so called "College Jazz Ensemble".

For decades, his changing formations have been like a regional school of Jazz. Much in the spirit of Art Blakey's Jazz Messengers. Later on he co-founded the independent label "Jazz 'n' Arts" with Olaf Schönborn and Thomas Siffling. In addition to "Four Corners" other hidden Münzer projects for various music libraries are highly recommended, most of them in collaboration with jazz pianist Wolfgang Lauth. In the 70’s and 80’s he records some interesting Jazz and Funk library LPs, under pseudonyms such as "The House Band" or "Sound Factory Inc.". Under the name "Jazz Unit" a vocal Jazz album was released in 1982 with his wife, singer Peggy Drake. This forms part of the next treasure trove of fabulous work by Mannheim's Jazzman Fritz Münzer ...