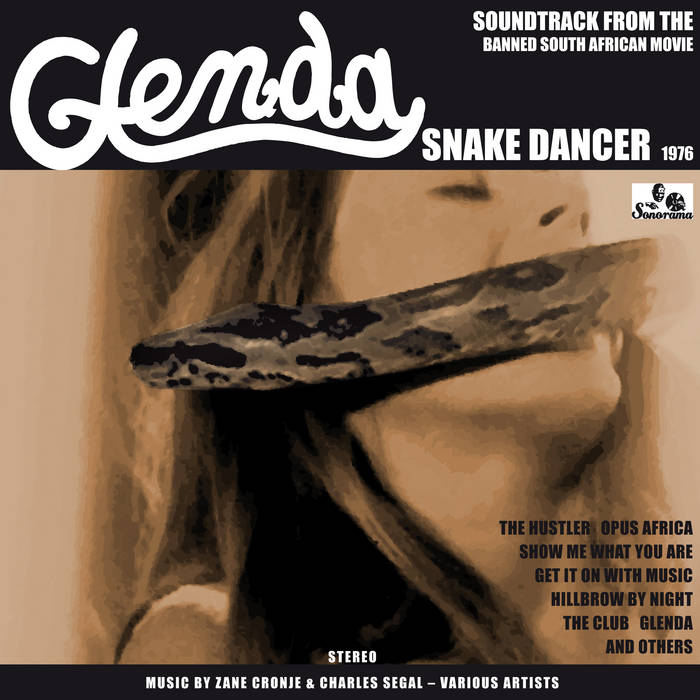 As one of the world’s most repressive governments, 1970’s South Africa was not a place to be artistically different. The “Snake Dancer” movie stands out as a cultural snapshot and government bashing call for personal freedom. This corresponding soundtrack album is a terrific exploitation discovery aswell. “Snake Dancer” narrates a dramatic exploration of liberty, recounting an erotic dancer`s “career” against a crucial regime within a semi-biographical and half documentary script. South Africa had become a British colonial outpost, which yielded to Dutch “Afrikaans” sovereignty in the 1960s and the repressive racial segregation of Apartheid. When former teacher Glenda Kemp turned to stripping to work her way through college, uptight South African audiences were scandalized by her exotic routines and particularly by her nude python dance.

The movie tells her story and with Kemp playing herself, the film re-creates incidents from the dancer's life, including the government's efforts to ban her performances. That a young woman was able to prosper as a stripper under Apartheid, where such forms of entertainment were strictly banned, and became famous in her country, makes the story endearing despite the cheaply made screen production. The government tried to censor her, the church condemned her and her own fiancée disapproved. But Glenda dances on to her own beat. The true story of resistance is told through short dialogues and authentic newspaper clippings. A supposedly devout Christian, Glenda felt there was nothing wrong with her erotic, oiled-up snake routines. But with the regime controlled by the Calvinist Dutch Reforms Church, all films with sex and politics were heavily censored. And with furious prudes and undercover cops crashing her show, Glenda Kemp was effectively forced into an early retirement.

There are many surprisingly different sides to the soundtrack. Most of the arrangements capture the harsh glare and heat of erotic live club performances, evoking a liberated but “vulgar” atmosphere, that probably many young South Africans were longing for during the 1970s. The funk and disco inspired tracks still have the ability to rock clubs around the world today, thanks to the extraordinary ideas and studio skills of producer Zane Cronje. The score implies to the knowing listener that some sort of dancing action may be forthcoming and most of the tunes have a strangely yearning quality throughout. And there is a glorious pop appeal on some of the songs due to the vocals of a female background choir, with panoramic strings and brass attached, interrupted by harsh psychedelic guitar riffs or afro pop drumming with heavy bass sounds, plus some lovely piano jazz and bossa nova inspired tracks inbetween.

Zane Cronje and Charles Segal employ many hip sounds from the U.S.A. or Europe in a technically perfect manner. Some of the impressionistic sound colours seem to be inspired by the big French and Italian Soundtrack works of the 60s and beginning 70s. The lilting lounge sounds serve as links between the hip shaking vocal tracks, that surround the bizarre dance routines of snake dancer Glenda during the movie. But how to come correct with an entertainment soundtrack in a
country of repressive governmental institutions? The film depicts a political culture that saw nothing immoral in owning human beings and whose greatest fear was that someone might be enjoying themselves. Consequently the movie became a forbidden subject and was never shown in mainstream cinemas. But with further-reaching bans in effect, the South African underground cinemas flourished with so-called “tea rooms”, that offered films, food and drink for low prices.

Due to its special history of production, the rise of independently produced filmmaking and the invention of the worldwide web, “Glenda” became a unique cult movie today not only in secret tea rooms around the world. At the time of production the movie failed to start a fire because of many reasons. Due to strict censorship within South Africa, de Villiers’ film was snipped of all its nudity or sexual situations and consequently failed in his own country. The movie director had no more luck selling the film abroad, as hard-core pornography ruled the scene by mid-decade.

A few promotional soundtrack LPs were pressed on CBS/ South Africa and sent out to international publishers and distributors, unfortunately without any success. An unplayed copy of the impossible to find album was recently discovered in the huge archives of a German publisher and the license owner Charles Segal gave his permission to an international (re-)release. Finally all tracks were carefully remastered from the vinyl copy in 2009 due to the complete loss of the master tapes.

The film was released in 2006 by “Mondo Macabro” but the quality of picture and sound is not perfect because the original 35 mm elements were unavailable. Nevertheless the DVD is strongly recommended, featuring an exclusive Interview with director Villiers, which covers his career in depth, including his personal thoughts on the feature and the world of film-making in general. He discusses his early films, the financial difficulty working in South Africa, and how political pressure effected the movie industry. His memories are rounded out with memories of Glenda and the very real controversy that surrounded her at the time. Former South African snake celebrity Glenda Kemp is now a teacher again, more religious than ever, living in the outskirts of Durban.