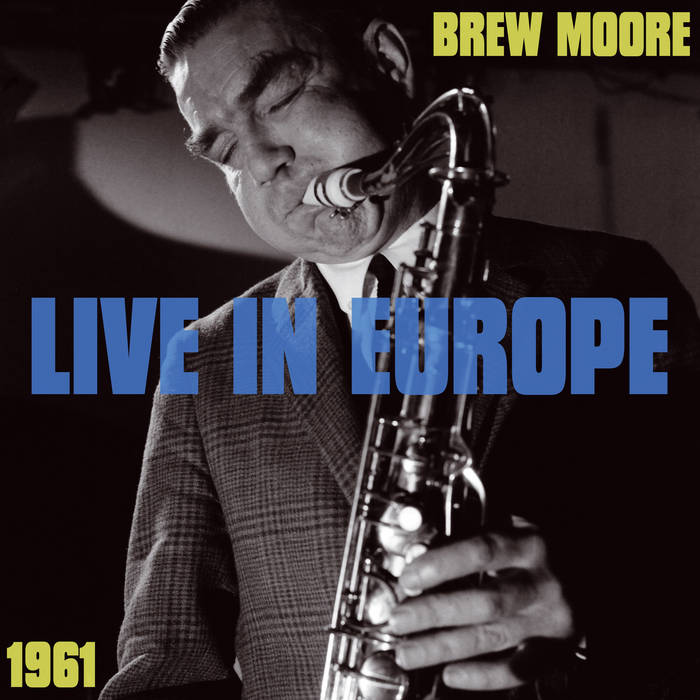 The music presented on this album for the first time was recorded in the year when West Coast tenorist Brew Moore immigrated to Europe. He arrived in Paris and played with renowned drummer Kenny Clarke at “The Blue Note”, later at “Nalen” in Stockholm and for Danish TV with Scandinavian cats Lars Bagge, Niels-Henning Ørsted Pedersen or Alex Riel. “Live In Europe 1961” features seven tremendous quartet performances from Scandinavia and France, neatly mastered, plus unseen archive photos from Denmark and new liner notes by Arne Reimer, author of “American Jazz Heroes”.

“Brew is incapable of playing a dishonest note. His music is just pure and loving and a joy to hear.”
Dan Morgenstern in Downbeat, December 1969

“Brew has two absolutely golden gifts. He swings like mad and he has soul. These are things you cannot learn by woodshedding, or in a conservatory. You have to be born with them or learn them by living. Brew had them and he also has a priceless gift for phrasing.” Ralph J. Gleason, liner notes for „The Brew Moore Quintet“, Fantasy LP 1956


The music presented on this album for the first time was recorded live in 1961, the year Brew Moore immigrated to Europe. He had come from San Francisco where he had been living since 1955, played the Black Hawk, the Jazz Cellar and the Monterey Jazz Festival, recorded a few albums for Fantasy as a leader and with Cal Tjader.

Being busy and productive, Moore enjoyed living on the West Coast. “My two favorite cities in the United States are New Orleans and San Francisco, probably they are more European than any other American cities.“ In 1959, the heavy drinking that had earned him his nickname “Brew” in the early days began to take its toll on his health, and he withdrew from the scene. He eventually recovered and decided to leave the United States for Europe, following his own principle: “I go where the work is.”

In early 1961, Brew Moore arrived in Paris and played with renowned drummer Kenny Clarke at The Blue Note. Back in the early 1940s, Clarke had been the house drummer at Minton’s Playhouse in New York and became a major innovator of the bebop style of drumming. He had settled in Paris in 1956 and his all American trio featured expatriate Jimmy Gourley on guitar and Lou Bennett at the organ, often accompanying name players passing through. “Everybody wanted to play with Kenny Clarke,” as Jimmy Gourley remembers. Brew Moore was welcomed to join them and ended up staying in Paris for half a year.

Looking back on his fairly short career, Moore never gained a degree of real fame. Born as Milton Aubrey Moore Jr. on March 26, 1924 in Indianola, Mississippi, his first musical instrument was a harmonica given to him by his mother as a seventh birthday present. At the age of 12 he started playing trombone in a Dixieland band and then switched to clarinet and finally tenor saxophone. After briefly attending the University of Mississippi (Ole Miss), he started playing in Memphis and arrived in New Orleans in 1942. Moore visited New York in 1943, just to hear what bebop was all about. When he returned to New York in 1948, he had to wait six months for his Local 802 Union card that would allow him to work in the city.

One of Moore’s first jobs in New York was working with Claude Thornhill in 1949, even if only briefly. He performed with Machito’s Afro Cuban orchestra at Birdland and the Apollo and also started playing in Kai Winding’s group, which included young Gerry Mulligan, George Wallington, Curley Russell, Max Roach or Roy Haynes. They played regularly at the Royal Roost and Bop City and recorded for Prestige and Roost. Moore’s playing began reaching a wider audience when he was featured on a Prestige recording entitled “The Brothers” on April 8, 1949 along with five other tenor saxophonists. The name derived from the “Four Brothers” who had become famous as Second Herd in Woody Herman’s band, including Stan Getz, Zoot Sims, Al Cohn and Allen Eager. One tune on that album, “Four And One Moore”, was composed by Gerry Mulligan, dedicating the title to the special guest. All five of them played in the light-vibrato style originated by Lester Young.

Moore was clearly inspired by the swing tenor of Lester Young. It was apparent in his music but also in his stance, holding his horn at an awkward, crooked 120-degree angle from his body. He once said, “Anyone who doesn't play like Lester Young is wrong.” Later, he played a Birdland engagement with Charlie Parker, Miles Davis and J. J. Johnson and was also booked in 1953 to appear again with Charlie Parker in Montreal for a TV performance on CBFT’s Jazz Workshop. With his relaxed sound, specific melodic architecture and his almost laid back concept of time, Brew had merged Parker’s and Young’s idiomatic style. “When I heard what Bird had done for himself, I realized that Pres was not the complete messiah. So I combined Bird and Pres and my own thing.”

Brew Moore was never in one place for too long. After six months in Paris, he then moved to Copenhagen in late 1961 where he lived for the next 13 years, though often returning to the US playing occasional jobs in Manhattan. “I felt more at home in Denmark than any other place. I’m happier waking up in Copenhagen. New York is exciting. There’s always something happening, but a lot of it is unpleasant. It is more enjoyable to play in Europe. Audiences are more open-minded, and the European pace is more my pace.”

Shortly after his arrival Moore recorded for television and radio in Stockholm and Copenhagen, including Niels-Henning Ørsted Pedersen, who was only 15 years old, and the up and coming Alex Riel: “I was the house drummer at the Jazzhus Montmartre in Copenhagen in the 60s and had the pleasure to play with Brew Moore on several occasions in this club. I remember one evening in particular since there were no less than four great sax players on stage at the same time: Lars Gullin, Ben Webster, Dexter Gordon and Brew Moore. They all sounded so different. You could always hear: This is Brew Moore - no doubt! I also picked him up with my old VW bus and we drove to small clubs, playing gigs outside of Copenhagen. I believe we played in Sweden too and did at least one recording together. I also remember meeting him and hanging out with him in New York. He was the nicest guy in the world and he played so fantastic!”

In 1962, he recorded his first LP with Danish, Swedish and American musicians and used his new Copenhagen address as a title, “Svinget 14”, emphasizing the hard swing in his music. Even if his cool sound was considered out of fashion he once said, “I hope that swinging jazz will come back! My main idea is to get back to simplicity. I like a small group where there is no other front line and I can let myself go. The biggest kick to me in playing is swinging - freedom and movement. And with a small group, I can do this more easily.” Moore also started a fruitful collaboration with Swedish baritone saxophonist Lars Gullin and later, in 1965, he played the Berlin Jazz Festival.

The end came very suddenly: Moore was visiting a restaurant in Tivoli Gardens, celebrating a large inheritance. He fell down a flight of stairs, broke his neck and died on August 19th, 1973. In an early interview with Ralph J. Gleason in 1956 Moore said: “Music must be a personal expression of one’s own world and way of life. When everything else gets to be a drag there is music for forgetfulness and also for memory and for a reminder that there is more good than bad in most things. The idea of playing for me is to compose a different, not always better I’m afraid, melody on the tune and basis of the original song, rather than construct a series of chord progressions around the original chords. I feel that in several spots in this group of tunes we attain the rapport necessary for good jazz. I hope so.”