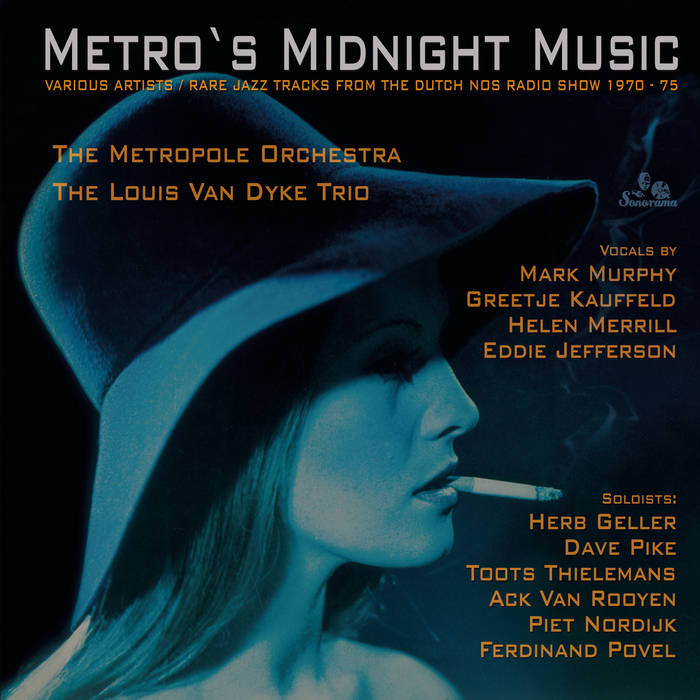 PlayItLoud! A tribute to the music my parents listened to when I was a kid. Surprised to find myself really appreciating the old skool "soft-jazz" after so many years.

The broadcasting of jazz programmes from the Netherlands began in the early 50s with unique formats by VARA, AVRO and many other stations. Joop De Roo began his career in 1959 at Radio Hilversum as a producer for Light Music. Later on he started with the production of club concerts and radio or television shows in the Netherlands, featuring the famous Metropole Orchestra, the Louis Van Dyke Trio or the Skymasters Big Band. Then Joop kicked off his internationally famous radio show “Metro`s Midnight Music” at NOS Radio in 1968 and soon reached the high standard, to which other jazz programmes and session broadcasts were judged.

His outstanding schedules were loaded with exclusive session material including special announcements by three different presenters. The show`s title “Metro`s Midnight Music” refers to the famous dutch Metropole Orchestra, that often appeared as the musical host with legendary arrangers Jerry Van Royen, Rob Pronk or Kenny Napper for the production of ballads, Featuring internationally famous Vocalists And Soloists within Their All-Star ensemble. The previously unreleased jazz suite “Music of Harold Arlen”, with outstanding vocal performances by Greetje Kauffeld and Mark Murphy, was recorded in 1975 at VARA Studio Hilversum and is presented here on vinyl and cd for the first time. This legendary
session was broadcasted only once and soon vanished in the huge radio archives, where the corresponding master tapes could be traced by Joop De Roo in 2006.

When it came to the more swinging titles, the sessions were arranged by the Louis Van Dyke Trio as a musical host. Various international guest stars were invited to the VARA Studio in
Hilversum for short rehearsals and a first but final take with the trio on the same day. The corresponding recordings were shelved in the radio archives over the years and chosen by Joop for inclusion into his programme, that was broadcasted every week around midnight until 1980. Parts of the rare trio recordings were previously released on cd in small amounts, unmastered and falsely marketed as the “North Sea Jazz Sessions”, although the musical material can not be connected in any manner to the famous dutch festival of the same name. This newly mastered compilation now also presents some highlights of the rare trio sessions, with famous guests Mark Murphy, Helen Merrill, Eddie Jefferson, Herb Geller, Dave Pike and Toots Thielemans, all recorded on unique occasions in Hilversum between 1970 and 1974.

Besides his radio shows, producer Joop De Roo also produced highly memorable TV programmes with many of the big international jazz names like Bill Evans, Stan Getz, Max Roach or Sarah Vaughan, not to mention the many recordings with nearly all the great dutch musicians of the time. The man finished his splendid broadcasting work in 1986 as Head of Entertainment for Radio and Television. Since then, he worked as a special project manager at Amsterdam School of Arts/Hilversum Conservatory.

Big thanks to everybody involved into this special choice for keeping the spirit of music alive (Sonorama, September 2006)

All tracks recorded at VARA Studios Hilversum/ The Netherlands between 1970 and 1975, produced by Joop De Roo for NOS radio`s “Metro`s Midnight Music”, from the archives of Joop De Roo.