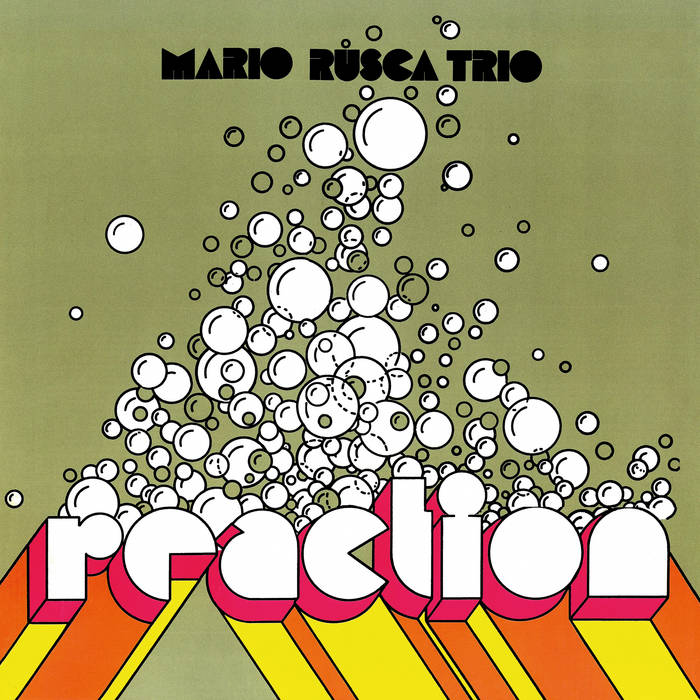 Mario Rusca made the first experiences years ago with a lot of performances in trio. From 1971 to 1974 Mario had a long collaboration with the famous violinist Joe Venuti. “Reaction”, finally reissued by Sonorama Records on CD/ LP/ DIGITAL, is his first album produced by Dynia World Records in 1974, performed with Franco Cerri`s son Stefano Cerri (el-b) and Gianni Cazzola (dr) - a long forgotten but definitely outstanding and fascinating modern jazz & post bop LP.

Jazz in Italy is about to rocket like a whizz kid, thanks mainly to the young crowd that is admiring the rock-tinged side of Black America’s music. Italy’s own jazz production though, is still caught in quite serious problems. For a considerable amount of time the in-crowd critics have determined the reasons behind these problems. They can be summarized as follows: a delayed start in comparison to other European countries, the scarce musical education in Italy, the indifference of mass media, but also the hurtful behaviour of certain journalists, who are always willing to mention that the worst Jazz in the whole of Europe is played in Italy.

Rather, it is true that the really good Italian Jazz musicians are few, which is easy to understand by looking at what it says above. It is not very likely for musicians to step back and to live like ascetics to be able to play Jazz. On the other hand, to play Jazz as a part-time occupation and having to share it with playing light music or other activities, inevitably sets limits. Jazz needs practice, one needs to work with it on a daily basis, making it become a habit. In order to reach this level of intimacy, one needs to have a well-defined cultural background and a solid awareness of the direction things are going to in our times.
That this is the first release by the courageous pianist Mario Rusca, born in Turin in 1937, and thus not that young anymore, can only be explained (and not justified) by circumstances such as described above. But there’s more to it. Though I really strive to support Italian Jazz and to discover new talents, often by going against the tide, I hadn’t yet heard the name of Mario Rusca three years ago. It was Joe Venuti who introduced me to him in the spring of 1971, while he was staying in Milan for some time. Venuti had arrived in Italy together with pianist Lou Stein, and he didn’t have any difficulties in finding good double-bass players and drummers to play with him. A problem aroused though when Stein decided to go back to the States alone. The search for a new pianist proved to be more difficult, but the old violinist finally spotted a shy and reserved person, who at the time was playing at the Capolinea every night, a club which can be found in an outlying district of Milan. That was Mario Rusca.

The first time I had the opportunity to listen to him was during a concert of Venuti at La Fenice in Venice taking place on May 9th, 1971. I was especially impressed by his musical craftsmanship as well as his rich and bright ideas. His style was evidently not oscillating between traditional and classic as the collaboration with Venuti might have indicated. He rather knew how to adapt himself to those styles. On the other hand he was able to define his own style, which is more modern, highlighting an enviable technique, and combining that certain something of a soloist and a confident taste. Since then, there have been numerous occasions where I had the chance to review Mario Rusca’s skills at the Jazz Power Club in Milan. He performs as solo artist, but also accompanies famous American musicians touring Italy. His collaboration with American singer Bunnie Foy who compelled him to spontaneously change between spirituals, Flamenco and Modern Jazz, can be named as one example.

Time after time, I finally convinced myself that Mario Rusca, apart from his rare and precious eclecticism, is one of Italy’s best pianists, who is well-positioned in the world of “melodico-armonico” even prior to contemporary Jazz. But he for sure is modern. And that’s why I didn’t hesitate at all when Enrico Dynia some months ago asked me to recommend an Italian solo pianist who was able to record an outstanding long player. I had about three or four names in mind, but it was Rusca who deserved to be the first. I’m convinced that those who have not yet had the chance to admire him, will be puzzled to learn what kind of undiscovered talents the Italian Jazz scene still has to offer.

When Rusca was asked to do this important recording session, he chose to collaborate with Gianni Cazzola and Stefano Cerri. And it was a good choice. The drummer Gianni Cazzola has been on the forefront of things for about 20 years, and there’s no need to introduce him to anyone. Just listen to the tracks to discover his sobriety and precision in playing, the interaction with his co-musicians and his sense of security with which he inspires Rusca and sets him in the right pace to open up the path to fantasy. Only on the last track of Side 1, Rusca is playing solo piano.

Stefano Cerri, 22-year old double-bass player and son of Franco, a guitarist well-known to all Italian and European Jazz fanatics, is the second son of an artist of our Jazz scene. The other one is the pianist Gaetano Liguori. I really hope that this series will continue. On this note, I just wanted to emphasize Stefano Cerri’s privileged position: he has been listening to Jazz at home from the day he was born, he received musical education from his father, and he learnt his profession by playing electric bass in various Rock and Modern Jazz outfits. He has been acknowledged for his energy, the intelligence and his means to immediately capture various situations. There’s no doubt that the future will bring him publicity and success.

The Mario Rusca Quintet won “The Cup of the Jazz Award” in 1984, organized by Adriano Mazzoletti on air in National Channel RAI Radio Stereo 1. They had a lot of performances in Europe and a great ovation at the International Jazz Festival of Montreal. Acutally Mario is an appreciated teacher of Piano at the SMUM school of Jazz Music in Lugano and at the Civic School of Jazz in Milan. Most recently available is “Speak Low”, his last studio work in trio with Riccardo Fioravanti (Cb) and Stefano Bagnoli (Dr). Actually this trio is performing live.

Many thanks to Mario Rusca. Thanks to Niels Fischer for his support .
sound restoration and mastering in 2013: Jury Lutz.
reproduction of the original cover design: Patrick Haase,
producer for reissue: Ekkehart Fleischhammer.