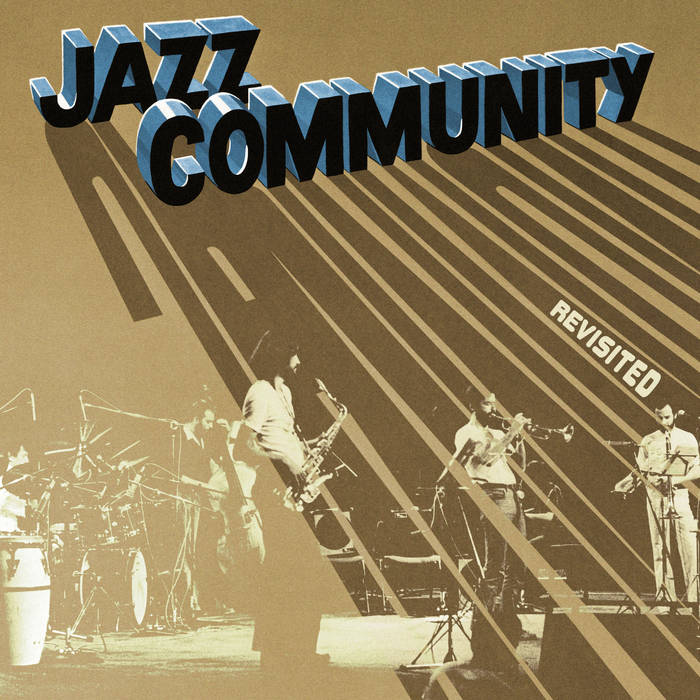 A compilation of lost tracks by the Zurich based Sextet “Jazz Community”. One of the most important Post-Bop and Modal Jazz bands from Europe, that featured the exceptional brass section of Hans Kennel (tp, flh), Paul Haag (tb) and Heiner Althaus (ts). Their most celebrated tracks from the rare LP’s "Jazz Community" and "Il Topo" are on one album. All recordings produced in 1979 at the studio of Bruno Spoerri and in 1983 in concert at The Club in Rubigen, Bern. Lovingly restored and remastered in 2018, available on vinyl LP and as a 6-Page Digipack CD/ Digital Release with four additional recordings.

There were many changes in the Swiss jazz scene of the 70’s. Some of the groups were dissolved and new ones founded. During this time "Jazz Community" was launched and the group distinguished themselves from many others with an impressive pre-history. This history runs deep with the sextet "Magog" founded in 1973. "Magog” achieved international success through live performances at the Montreux Jazz Festival and the release of two LP’s. Significantly involved was the brass section, consisting of Hans Kennel, Paul Haag and Andy Scherrer. When the latter left the sextet for a stay abroad, Heiner Althaus, following Scherer's recommendation, succeeded him.

After the disbanding of "Magog”, the front line stayed together to form "Jazz Community" in 1978. Although they played well together, the brass players incorporated different styles of soloing, which was perceived as an enrichment. Kennel, one of Switzerland's best-known Hard Bop trumpeters, presents himself as a mature ballad player and a free, resourceful improviser. Haag blows the trombone in a strong, earthy style of the early Jazz years. Althaus improvises in airy climes with rich landings. The band's performance at the Montreux Jazz Festival in 1979 was released on a live LP, with four additional tracks recorded in the studio of Bruno Spoerri.

In 1981, the rhythm section of "Jazz Community" was replaced, which brought about a completely different sound and style. The three Bern musicians Jürg Ammann, Michel Poffet and David Elias had played together in the band Uepsylon for several years. Back then they were one of the liveliest rhythm groups of the Swiss Jazz scene. They avoided common schemes and thanks to Ammann as a composer of themes, broke new ground. Again, a live recording was released, this time under the name “Il Topo”. This double album can be interpreted as a summary of the “Jazz Community” repertoire. Jürg Solothurnmann: Il Topo, for "eager" lovers of Post-Bop (quote from the album cover). This new compilation “Jazz Community Revisited” contains both live recordings from Il Topo and the four studio tracks from 1979.

Hans Kennel played in one of the first Modern Jazz groups in Switzerland, in the quintet of the visionary composer and multi-instrumentalist Remo Rau. The progressive repertoire of the group included original material, but also versions of tracks from the first LP by Ornette Coleman. In the early 60’s Rau worked as a promoter for the Zurich Jazz club "Africana". He wrote Operas, Chamber music and experimented with different styles of Jazz. He was introduced, personally, by Horace Silver at the piano to the harmonies and rhythms of Hard Bop. This quintet also took its first steps towards Free Jazz, and Kennel developed into one of the best Swiss Jazz trumpeters.

In 1962 he was awarded as "Absolute Best Soloist" at the Amateur Jazz Festival in Zurich. Four years later, Kennel won the award again, but appeared out of competition. He studied classical trumpet at the conservatories of Zurich and Freiburg, then Jazz at the renowned Berklee College of Music in Boston. His musical path led him through a variety of styles, from Hard Bop to Jazz Rock (with the “Jazz Rock Experience”), freer music (with “Magog”) and Post-Bop (with “Jazz Community”) to the combination of Jazz and Swiss Folk music. In 1983, he founded the formation “Alpine Jazz Herd” with Jürg Solothurnmann. Meanwhile, Hans Kennel experiments with natural horn instruments. For him, "Jazz" has just become a word in quotation marks. He plays instruments such as alphorn or büchel and leads highly individual ensembles that combine Jazz elements with the traditional melodies of Switzerland.

His work with new harmonies, which are dependent on the intervals of the natural tone series, led to the renaissance of the alphorn. To this day, he explores new sounds, breathing techniques and effects. Hans Kennel says: "Folk music is primarily music that suits itself and the performing community. World Music is the opposite. This is not genuine music, but an economic operation. The vile commerce that uses elements of Folk music. Isn`t it astonishing that in this country, freely available music from Africa, Asia, etc. is 'cool', but its own lively Folk music is not? And what about the vanity of cultural institutions who “decorate themselves with foreign feathers”. From "Jazz in der Schweiz (Jazz In Switzerland)", (Chronos Verlag).

Ekkehart Fleischhammer, based on text passages from "Jazz in Switzerland"