Round Trip To Rio 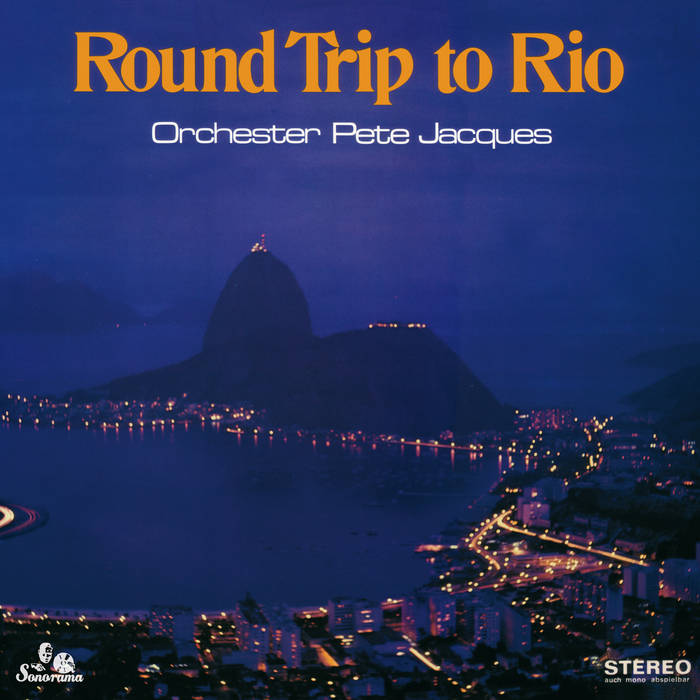 Pete Jacques travelled Scandinavia, Brazil and Germany for decades as a hugely successful composer, arranger and pianist – a genius behind the international “easy” jazz scenes and music libraries of the 60s and 70s. His “Round Trip To Rio”-Lp stands out as a rare find in the fields of European bossa orchestrations, backed by a funky rhythm section and the right spice of enchanting scat vocals here and there. This album is full of exceptional compositions built around tight and surprising beats and arrangements, finally evoking impressions of an acoustic trip around Copacabana with fine produced bossa soundtracks for freefloaters,
martini zippers and all kinds of Ipanema dreamers – a blueprint for many later European orchestra productions capitalizing on the fashionable bossa nova and Brazilian beats.

It is music for bachelors “Brazilian style”, solely to be found on the sought after original Lp pressing released 1970 in small amounts on Brunner-Schwers German MPS sublabel “Center”. The twelve album tracks are recorded from the master tapes and re-released in their original formation for the first time, with original front cover plus three additional tunes from the same recording sessions. More unique 70s sounds of Pete Jacques and his orchestra can be found on other vanished albums like “Scotch & Soda” or “The Rainbow Orchestra” to name a few. They also include rare danefloor jazz with a deep hint towards Funk and Soul, to be heard on the recently released Sonorama S-04 (Vinyl-EP). So watch out for more rare grooves by the big three library suspects Heinz Kiessling, Pete Jacques and Werner Tautz to be re-released on Sonorama Records soon.

Pete was born in Franzensbad, Czechoslovakia, in 1935 - son of a Swiss mother and a White Russian father, who succeeded as a Soloviolonist and Concertmaster. He made his first appearance on the classical circuit at the age of eight, dabbling with jazz during his classical education and won the first price later on at the Zurich Jazz Festival in 1953. After a brief stint with Chet Baker, he joined some of the best jazz combinations in Sweden and Denmark (Ake Persson, Foss Trio, Ernie Englund, Kurt Weill Band, Harry Arnold Radioband), and even sang background on productions of Alice Babs and Povel Ramel during his stay on the Swedish jazz scene.

Always on the experimental side of things, Pete not only produced a series of legendary recordings in the 60s with singer Ruth Linn, arranging up to ten voices together in the first multiple recording mode, but also arranged big Jazzworkshops for German TV bringing together the best Swedish jazz musicians of the time. And of course he composed, recorded and performed within his own splendid “Pete Jacques trio” in the 60s. As a hosting pianist at the legendary jazz club “Nalen”, he accompanied stars like Stan Getz, Lester Young and Benny Bailey. After touring with Toots Thielemans and Jimmy Woode, he recorded the first version of the huge jazz hit “Bluesette” in Stockholm for Metronome Records, then leaving Sweden in 1964 to work in Germany and live in Munich, where he also arranged for nearly all the well known German bands of that time.

At the Bavaria Filmstudios, Pete Jacques worked as musical director in co-productions with artists like Dusty Springfield, Tom Jones or Rolf Harris and did various TV specials in Rio for the US company ABC with co-host Sergio Mendes and Brazilian stars like Tom Jobim, Vinicius de Moraes, Edu Lobo, Jorge Ben, Elis Regina and Dori Caymmi. In 1973, he joined the Swiss Broadcasting Big Band, for which he recorded some memorable concerts featuring personalities like Kai Winding or Art Farmer, then hosting the famous “jazz in concert” series there for almost 10 years, having every known jazz artist as a guest. Since then, Pete Jacques is playing, composing and arranging independently.

Recorded 1969 and 1970 at Ariola-Studios, Berlin
Tracks 13/ 14/ 15 are bonus tracks from recording sessions for “Round Trip”, not included on the original LP

Producer for reisuue and new sleeve notes by Ekkehart Fleischhammer, photos of Pete Jacques courtesy of the artist, reproduction of original front cover by Patrick Haase, design by rab.bit.
Big thanks to Pete Jacques and Joachim Tautz.