by Fitz Gore & The Talismen 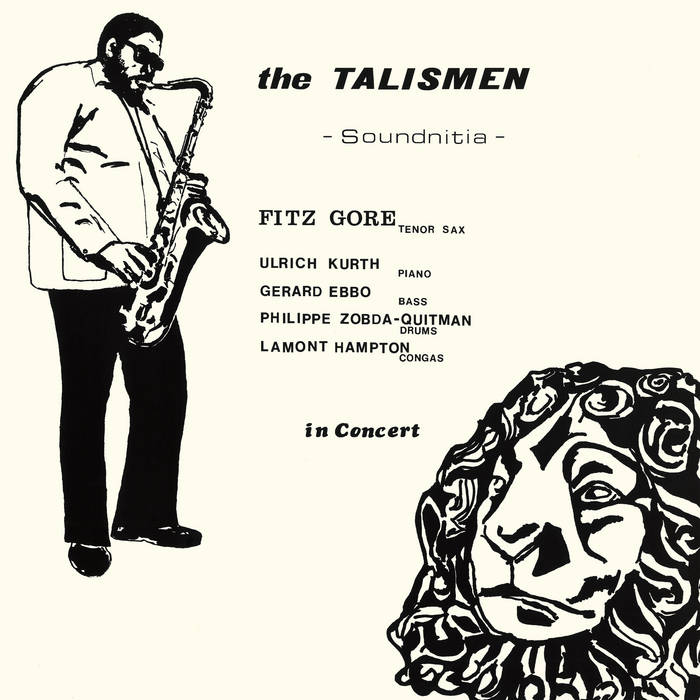 This is the first ever reissue of the lost debut LP by Jamaican tenor saxophone player Fitz Gore and his experimental group The Talismen from 1975. The work was originally released on Gore’s GorBra label and delivers an introspective, sensitive form of Spiritual Jazz. Recorded live in West Germany, the personnel are “Shepherd” Fitz Gore with Ulrich Kurth (Piano), Gérard Ebbo (Bass), Philippe Zobda-Quitman (Drums) and Lamont Hampton (Congas). The LP includes versions of John Coltrane’s “Dahomey Dance“ and the Horace Silver classic ‘Song For My Father“. The reissue was carefully remastered in 2021 and features the original cover design with a two page insert of the original notes, completed by the inclusion of Fitz`s poem “Sketches of Pain“.

"Soundnitia" is the cipher under which the experimental group "The Talismen" constituted in 1974 and made its presence known on the Jazz scene with the first LP. The initiator and spiritus rector of the avant-garde ensemble is the saxophonist Fitz Gore, a "stormer of the valves" and unknown to the augurs of the jazz scene. As a saxophonist and a newcomer, he documents with his ultra-hard sound. Fukara (Swahili) is a clear affinity to the school of "hard blowing" tenor players. In the 1960’s Fitz managed various bands. Firstly, in the south of France, then Paris, which took part in Galas, concerts and film productions, where he made a name for himself primarily as an interpreter of spirituals and Negro folk songs.

Fitz Gore, born on 16th August 1935 in Kingston, Jamaica, has been making music since the age of six. As a member of the school choir, he studied the diatonics of the Gregorian chant and played classical Hawaiian guitar. His favourite composers include Duke Ellington, Sonny Rollins, Richard Wagner and Gil Evans. While establishing himself in the music business, he worked as an actor and writer. Like Charlie Parker before him, for whom the poetics of the Persian lyricist Omar Chajjam was a spiritual leitmotif, the man from Jamaica is a committed poet. The International Book Exchange presented a part of his literary oeuvre.

Fitz Gore draws his ideational impulses from biblical texts, especially from the Psalms of David. Dreams of a new paradise are articulated in his arrangements and compositions. He says, " The music - Soudnitia - has a spiritual fulcrum, which must act or foist with its compelling leverage(s), a form of panacea. To heal, as to vehicle sanctified pastus, hope and joy, to mankind". "Healing" became the code word of the "Talismen”.

Technically and stylistically, Fitz Gore's improvisations are reminiscent of the musical language of Sonny Rollins and Colerman Hawkins, but John Coltrane, Ben Webster, Sonny Grey, Johnny Griffin, Wilton Gaynair and Jo Maka were not without influence. Fitz Gore and pianist Ulrich Kurth began their collaboration in Autumn 1973, performing together for the first time in January 1974 at the Winterfest of Bonn University followed by a guest performance in Strasbourg. In the Autumn of the same year, Fitz Gore engaged two of his former partners, the French bassist Gérard Ebbo and the Martinique-born drummer Philippe Zobda-Quitman and staged the first concert with this quartet in a monastery near Bonn under the lemma "The Talismen".

In the spring of 1975, the American percussionist Lamont Hampton joined the Talismen collective and brought with him a bundle of new musical impulses. The Jazz Studio of the Bonn "Collegium Musicum" served as the experimental laboratory, where they discussed and rehearsed in endless nightly séances. This resulted in the live recording of the concert from June 14th 1975. This became the LP and seems like the product of an alchemist's kitchen. Whether "Toxon" or "Panacee" depends on the dosage. For it is "the dose that makes it, that something is a poison", teaches Theophrastus Bombastus von Hohenheim, known as Paracelsus.

Ulrich Kurth (Piano) was born on 29.09.1953 in Kaltenkirchen near Hamburg and received eight years of classical piano lessons, most recently at the Cologne Conservatory. As a second and third instrument, he plays the guitar and the flute. Besides Ludwig van Beethoven, his favourite composers include modern classics such as Maurice Ravel, Béla Bartok and Olivier Messiaen. At the age of eighteen, he came to jazz via rock music. Musically he was influenced by Fitz Gore, stylistically by Thelonious Monk, Mal Waldron, Bill Evans and Irvin Rochlin.

Gérard Ebbo, "Prof. Dr. Splüm”, (Bass) was born on 27.11.1942, "in the middle of the last useless war" in Casablanca, Morroco. His favourite bass players are Oscar Pettiford, Ray Brown, Paul Chambers and Charlie Mingus. He is closely associated with the black musicians from the Nuer tribe, who were deported from Sudan to Morocco. As a member of the "Talismen", Gérard Ebbo not only guarantees the crucial rhythmic and harmonic basis, but also provides fundamental impulses for musical coordination.

Philippe Zobda-Quitman (Drums) was born on 08.08.1947 in Martinique. He has been making music since early childhood and later worked as a musician and dancer in France. His musical idols are Alan Dawson and Elvin Jones.

Lamont Hampton (Conga Drums) was born on 07.08.1951 in Indianapolis. He studied with Carlos Santa Cruz and was significantly influenced by the Afro-Cuban drumming style of Chano Pozo.


Singing songs, blasé hymns,
Singing OUR SONGS
Surely echoes hear waves, hear from our strains
In the harvest of T-I-M-E
Since we disharmonise/
Should we not SLUMBER CHORUS
in dischord?
--- MORE PRACTISE??

(from „SKETCHES OF PAIN/ Hymn To a Heart“ by Fitz Gore)

In memory of Fitz Gore,
mastered 2021 by Roskow Kretschmann at Audiomoto, vinyl cut at SST,
producer for reissue: Ekkehart Fleischhammer,
reproduction of original cover design by Gisela Gore:
Patrick Haase aka rab.bit. thanks to Gisela Gore and Fabian Stephenson.