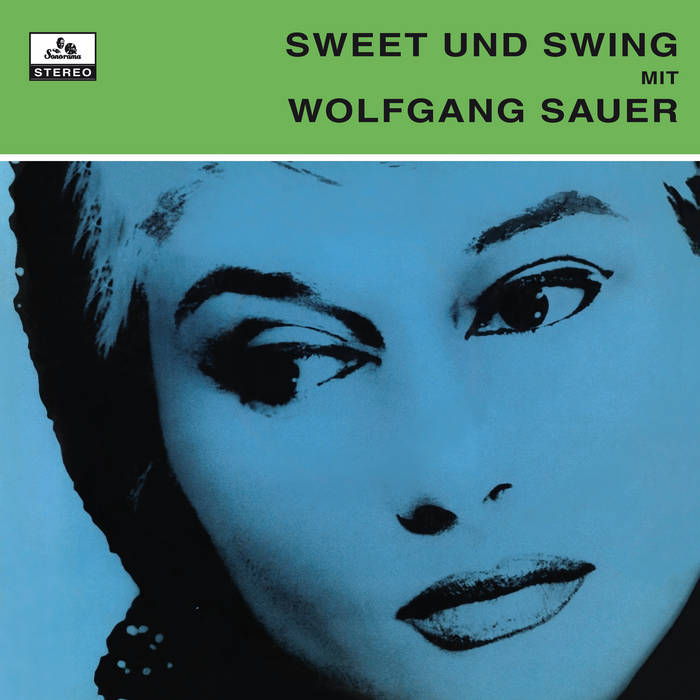 Long-lost German vocal jazz album from 1959 recorded with early stereophonic sound technology. Vanished LP that ranges among the earliest examples of vocal work from Europe: Blind singer and piano player Wolfgang Sauer performs famous tunes from the Great American Songbook like “Stardust”, “My Melancholy Baby” or “How Deep Is The Ocean”, surrounded by the lush swinging orchestra sounds of Paul Kuhn & Friedel Berlipp – from “jazz ballads with strings” to dancing tunes in the style of “Joe Williams meets Count Basie”. Cologne session recordings, available for the first time in 50 years and remastered 2009 from a vintage demonstration disc in most perfect sound quality.

“Sweet und Swing” is an important vocal album under many aspects. Singer Wolfgang Sauer has been heard largely in the fields of “Schlager Pop” that first propelled him to stardom in Germany during the 1950s. Nevertheless jazz music was his passion and rumours started among fans and collectors about an immediately retired jazz album from 1959. Recently one of the few existing copies was traced and became the “master record” for this 1:1 reissue.

On the long-lost LP Wolfgang Sauer devotes his vocal talents to singing some of the greatest songs from the Great American songbook. Unfortunately the production has been realized in a year, when music fans were interested in the arrival of US-soldier Elvis Presley in the German town of Bad Nauheim instead of checking out swing records from Germany. Simply another story of an important album released at the very wrong time.

Wolfgang Sauer deserved some of the very best musicians from Germany, and here he had it: The songs were recorded with the orchestras of German music legends Paul Kuhn and Friedel Berlipp (aka Berry Lipman) in Cologne. Sauer is shown in a new light here, as a superbly gifted jazz vocalist with an unmatched feeling for the sheer beauty of ballads and a unique ability to transmit his feelings vividly through his voice. Thanks to the very unique arrangements of Kuhn and Berlipp, the fine treatments of songs include “jazz ballads with strings” aswell as danceable tunes in the style of “Count Basie meets Joe Williams”.

The opener “Stardust” has been recorded by nearly every famous jazz singer of that era, e.g. Billie Holiday, Frank Sinatra or Mel Tormé, while Ella Fitzgerald included a version of the following “My Melancholy Baby” on her Verve album from 1960. All other songs on “Sweet und Swing” became famous aswell in our days through renditions by wonderful artists like Chet Baker, Blossom Dearie, Carmen McRae, Mark Murphy or Diana Krall to name a few.

Fifty years after the recording sessions “Sweet und Swing” finally gets his long deserved reissue as the first vocal jazz album from Germany. It has also been Sonorama`s most difficult sound restauration experience so far. The original recordings were transferred from a badly produced demonstration disc as the only remaining source. Due to many “early mistakes” not only in the recording process but also in the production of the original mother disc in 1959, the material had to be denoised over weeks and finally sent over an analogue mixing desk to reach a result that should be very close to the original listening experience - “how it was meant”. Unfortunately there were no authors, musician names or any other liner notes to be found on the original album.

Last not least the early album pressed on bad wax is among the first German records produced in stereophonic sound. The very first stereo LP was released in 1957 by the small American label “Audio Fidelity”. In 1958 stereo LPs already reached a good market share in the US and also became the standard technology of the Deutsche Grammophon company in Germany. A new material called “polyvinylchlorid” was responsible for the new narrow grooves and a better quality and conservation of the recorded work. Unfortunately “Sweet und Swing” has not been produced on the best vinyl material available at the time. EMI finally stopped their production of shellac records in the same year while the stereo vinyl disc became the technical standard for an uprising music market during the following years.

With this carefully remastered CD and LP-reissue we kindly invite you to sit down and listen to one of the first “stereo vocal wonders” from Europe.

Wolfgang Sauer was born in 1928 and grew up in Wuppertal. At the age of seven months he began to go blind because of a glaucoma. During his first years in school he nearly lost his sight completely and started to wear dark sunglasses that should become his trademark. Aged twelve he went to a home for the blind in Marburg where he studied music theory and took extensive piano lessons. Immediately After World War II the man graduated from high school and already played jazz music with various combos in American clubs. Two years later he was heard on German radio for the first time. Because of his former career wish of being a political journalist or translator he started to study English and German Literature in 1949 at the university of Cologne. At the same time Sauer founded his first own jazz ensemble under the name of “No Name Band” and even started to tour in 1951.

Because of financial turbulences Sauer was forced to cancel his studies in 1952. That was when he started to concentrate entirely on his music activities. Now Wolfgang Sauer became employed by the “Nordwestdeutscher Rundfunk (NWDR-Radio)” in Cologne for a programme entitled “Teemusik (Tea Music)” and recorded with the well known orchestras of Kurt Edelhagen and Erwin Lehn. In 1953 the artist received an award as “Germany`s jazz singer No. 1”. He signed his first record deal but had to perform flat German pop music (“German Schlager”) instead of his beloved jazz songs. His most successful tunes were entitled “Eine Melodie geht um die Welt” (A Melody goes around the world), “Ein kleiner Hund” (“A little dog”) or “Du hast ja Tränen in den Augen” (But you have tears in your eyes). Nevertheless he continued to sing jazz tunes and toured the GDR in 1964 with Kurt Edelhagen to present a jazz programme, that was recorded by the former East German record company “Amiga”. Wolfgang Sauer received numerous awards, among many others the order of the Federal Republic of Germany.

Paul Kuhn is one of the best bandleaders and arrangers from Germany (“Basie is the base”) and led the famous SFB Big Band until 1980. As a piano player he became a dedicated follower of Art Tatum, George Shearing or Hank Jones. Kuhn accompanied many entertainment stars during his long career and was regularly featured on TV as actor, singer and piano player. He received numerous German awards, e.g. “German jazz piano player No. 1” in 1953, the “Golden Camera” in 1971 and the “German Jazz Trophy” in 2002 for his impressive lifetime work.

Friedel Berlipp, producer and composer, smoothed the way for numerous singing stars on their road to fame. Although a good arrangement remains the real power of a good recording, arrangers have to be seen as the music industry`s lonely wallflowers. He was born in Hannover, attended the conservatories of Hannover and Peine, and later on worked as an arranger and guitar player at the WDR (Westdeutscher Rundfunk) in Cologne before getting employed by an internationally reknown record company.