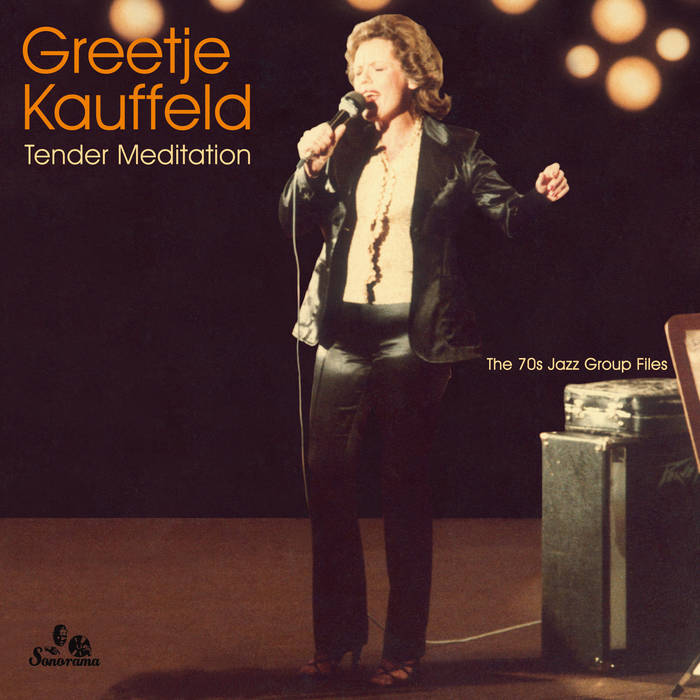 One of the greatest voices in European jazz: First compilation of Greetje`s amazing and hard to find 70s jazz group files, including lost vocal tracks with the finest sidemen from the European scene, pending between rolling jazz, bossa beats and sensitive ballads. Unique cross-section from her Dutch Only 1973-1980 albums incl. Sonny Bono`s “The Beat Goes On”, “When You Wish Upon A Star”, “Tenderly” and Edu Lobo`s “Meditation”, all songs carefully remastered in 2007.

This Sonorama compilation presents the amazing vocal jazz recordings of a Dutch lady, who already became a living legend with her constant stage jubilees while still going strong with over 80 live performances in changing musical formations within the year 2007. Her sought after 1970s tracks from the Great American Songbook are renowned both for their musical quality and especially for the quality of production. The musicians and Greetje harmonized excellently on a musical level. And what a wealth of repertoire had been created during this period with famous musicians like Phil Woods, Rob Langereis or Nils Henning Orsted-Pedersen. A combination of supervision by producer Joop De Roo and arrangements by Rob Pronk and Henk Elkerbout led to some of Europe`s most advanced but long deleted vocal jazz albums between the time of 1976 and 1980, entitled “A Tribute To Clifford Brown” and “Some Other Spring”. The three songs recorded in 1973 with the legendary Dutch formation “Diamond Five” had been included into the bands` original album “Back Together” and stand out as some of the finest example, that Greetje is able to sing any jazz melody in a unique and sensitive style. But the 70s turned out to be a difficult decade for vocal jazz releases from Europe. The involved record labels did not devote the necessary amount of attention to the distribution and promotion side so that the three albums remained widely unnoticed outside the Netherlands. This compilation shall stand out as a work of reference for all international music lovers who did not get the chance to buy these beautiful tracks at the time they had been produced. Greetje, “let us hear and we are happy”.

“Gratitude is what I feel when listening to these recordings. I am grateful for the chance to record this wonderful music during the 70s. Although it has been long ago, I can remember well the deep abandon and power of concentration that went into the recording process - all tracks recorded live and without any overdubbing! My Thankfulness goes to producer Joop De Roo, who was responsible for the production of most of the tracks on this compilation. Thanks to Joop for bringing me together with all these remarkable and magnificent musicians. Last but not least I would like to thank Sonorama Records for the final re-release of this timeless music.”
(Greetje Kauffeld/ December 2007)

“Greetje ... I can still see her sitting on the wall outside the studio. I hadn`t seen her for years, but had certainly heard a lot about her. She`d worked in the States and West Germany, now she`d suddenly appeared again. The childhood sweetheart had disappeared and besides, it was Joop De Roo she came to see in those early days and since then they have become inseparable. Abroad meant for her literally living abroad and gaining international recognition. Greetje is the only female Dutch vocalist that consistently takes the utmost care when expressing the lyrics of a song. And on no account will she make any concessions where this is concerned; the American audiences are far more sensitive to this than the Dutch. The pure essence of real love for some, is intangible and is quite often revealed in the first lines of songs interpretating love. “Some Other Spring” – but not the torn love interpretation expressed by the late Billy Holiday, no ... I mean the deep tenderness of Greetje `cause it makes me feel romantic. Maybe that childhood love will never completely die...”

(Joop Van Zijl/ TV Jounalist, from original liner notes of “Some Other Spring”, 1980)

“Let Me Sing And I Am Happy” (Greetje Kauffeld)

Compiled and annotated for re-issue by Ekkehart Fleischhammer, original recordings mastered by Carsten Daembkes, photo courtesy of Greetje Kauffeld, cover design by Patrick Haase (rab.bit) & Ekkehart Fleischhammer. All included tracks previously released on vinyl discs in the Netherlands only. Also watch out for Greetje`s rare 1974 album “And Let The Music Play” plus Greetje & Mark Murphy with Metropole Orchestra on “Metro`s Midnight Music” (1975), both releases also available from Sonorama Records. Thanks to Greetje Kauffeld & Joop De Roo for letting us revive these beautiful but lost recordings.