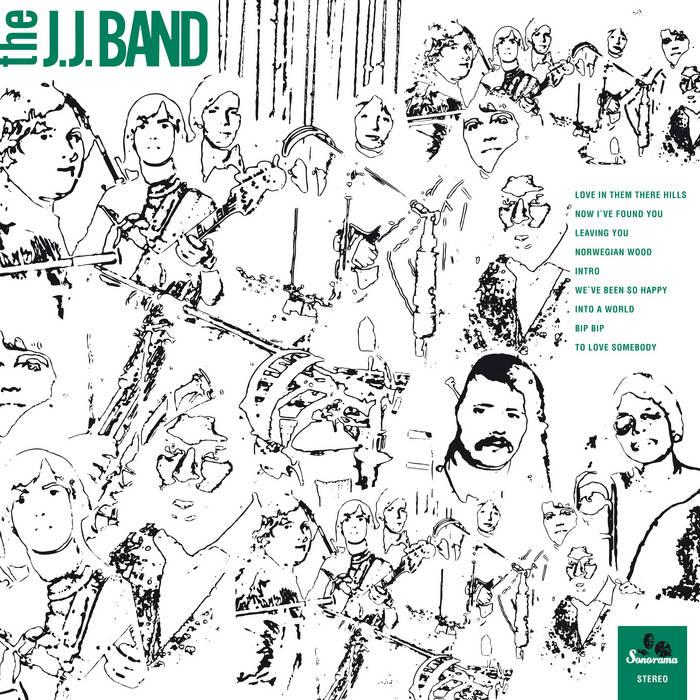 First reissue of the rare debut album by this progressive soul-jazz band featuring members of El Chicles and Chakachas, recorded 1970 in Brussels and originally released on the Polydor label in Belgium and Canada only. Astounding mix of jazz attitude, blue-eyed soul, prog funk, soft rock and even folky moments, including fine cover versions of ”Love In Them There Hills” by Gamble & Huff, “Norwegian Wood” and “To Love Somebody”, comes with two bonus tracks from their first boogaloo & soul beat 7inch from 1968, original album cover artwork with new liner notes, remastered 2009.

The year was 1966. The city was Charleroi in Belgium, where the two Portugese brothers Toni and Fernando Lameirinhas (alias Tony and Wando Lam) founded the band “Jess & James” as Belgiums` answer to soul music. They had lived in England before, catching the soul virus while playing in various beat bands like “Screaming Lord Sutch”. Their song “Move” suddenly became a massive hit all over Europe in 1967 and the band consequently produced three soul pop albums under the name of “Jess & James” until 1969 for the Palette/ Belter label. The boys were being discovered as a sure-fire commercial attraction in Belgium and Spain, but the fast success soon led to musical dissension within the group.

At the same time, the backing band of “Jess & James” started to separate under the name “J.J. Band” to experiment with new sounds, finally developing into a more soul jazz orientated outfit. A constant creative growth lyrically and musically within the group was self-evident in this first album simply entitled “The J.J. Band”. The new formation was led by arranger Ralph Benatar (Sax and Flute), Douglas Lucas (Trumpet) and Francis Weyer (aka Francis Goya/ Guitar), who all played leading roles on most of the “El Chicles” and “Chakachas” related releases of the times.

The minds behind the J.J. Band, Benatar and Lucas, started to write own material for the first longplay release aswell as taking famous songs and truely give them a new and more complex sound, with small horn & flute section, very diverse guitar moods and eclectic but excellent percussion sounds throughout. The LP was produced in 1970 by Roland Kluger, brother of composer and producer Jean Kluger, and solely pressed in small amounts by Polydor Records in Belgium and Canada. Two bonus tracks were pulled from the bands` first 7inch single “Cousins Jack” especially for this reissue, recorded 1968 in mono and with a pure boogaloo and hammond soul arrangement, that shows the straight forward sound of their earlier attempts.

Gamble & Huffs`“Love In Them There Hills” had been a big hit for the Pointer Sisters or The Three Degrees and is presented here in the progressive sound design of the times and with very tight guitar work. “Norwegian Wood” gets an unusual jazz treatment with nice breaks, mostly reminding us of some jazz waltz played by a street marching band, while the version on the Bee Gees`“To Love Somebody” shows a band capable of evoking a mood similar to the best moments of the Byrds or the Flying Burrito Brothers. And did we already mention, that the drummer goes nuts most of the time to create this special sultry tenderness?

It is the integration of various musical styles, strong rhythms and a deep feeling that makes this vanished album worthwhile. Most of the songs are originals, completed by the mentioned renditions of well known tunes in a modernized dress.That three of the songs are well known hits is obvious. But that they particularly lend themselves to an excellent soul jazz treatment with open drum breaks is obvious only upon listening. What was successfully attempted here was to adapt some soul and pop tunes to a jazz and progressive rock tempo, with a band capable of “quick changing” for another style within the same song and thus lifting it to a higher standard.

Jess & James aka the Lameirinhas brothers themselves moved to Amsterdam and transformed into the unsuccessful Latin Jazz band “Sail Joia” in 1975. At this point the short career of the J.J. Band was already finished. In 1971 the famous drummer Bruno Castellucci helped out on the sessions for the J.J. Bands` second album, also entitled “The J.J. Band”, recorded at Chappell Studios London. Their style had developed more and more towards progressive rock and although this final album was produced by the great Brian Bennett and released on CBS Records in the UK, it passed rather unnoticed. Then the musicians changed their name to “Plus” in 1972 and released a “real final” album on the label Pink Elephant, that should become another impossible to find collector`s item in our times. Now listen to the fascinating and lost debut album of this unjustly forgotten band from Belgium with depth and excitement.