The Liquid Moves Of Lars Gullin 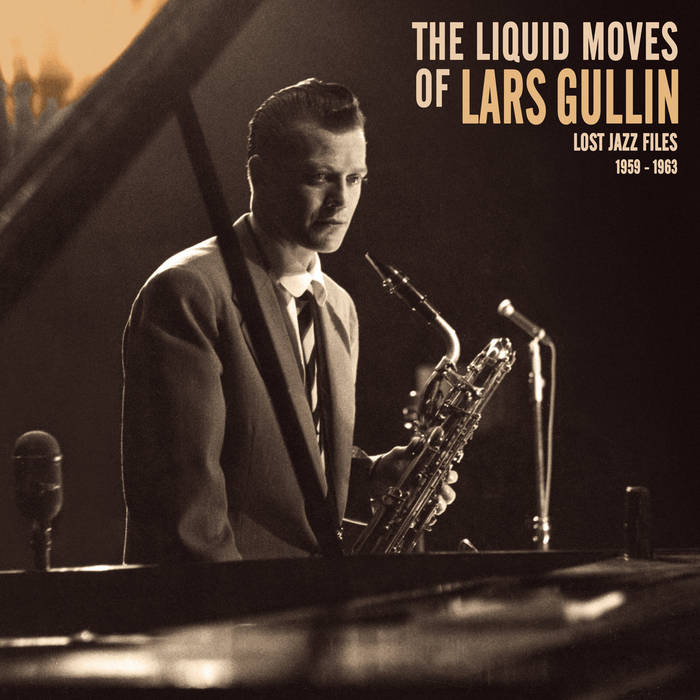 “I was very impressed by Lars. He had a very melodic and liquid way of moving through the changes” (Chet Baker). Previously unknown modern jazz tracks by the legendary Swedish baritone saxophonist, recorded 1959-63 in Europe, featuring icons like Sahib Shihab, Dexter Gordon, Flavio Ambrosetti, Rolf Billberg, Nils Lindberg and others. Carefully mastered recordings from collectors` archives, ranging from quintet to octet, with new liner notes and unseen photos. CD and digital album come with three bonus tracks from Denmark: lost vocal jazz from 1960 with Lars Gullin and Erik Moseholm.

The title of this compilation with previously unknown recordings by Swedish baritone saxophone player Lars Gullin clearly refers to his way of playing and a quote that Chet Baker once made about his European colleague. “I was very impressed by him. He had a very melodic, yes, a liquid way of moving through the changes.“ (1) The way Lars Gullin played his baritone saxophone was quite unusual: he managed to get a full tone with lightness, sounding elegant and fluent in playing the changes, which is quite uncommon for this cumbersome instrument.

Gullin first began playing the accordion as a young boy. After arriving in Stockholm in 1947, at age 19, he also learned to play the piano and clarinet. A few months after joining Seymour Österwall’s band, for which he played alto saxophone, he was offered the open position of the baritone saxophone in the group. “I immediately understood that this was my instrument. It’s got richness and depth, warmth, light and shadow, like a cello. I wanted a different tone than the usual harsh one. I tried a metal mouthpiece but changed to ebonite to get a tuba-like sound.” (2) Once Gullin started playing the baritone, he was obviously influenced by Gerry Mulligan and his soft playing and laid back style. He first heard Mulligan in 1949, when he discovered two 78-records of the Miles Davis Nonet that later became known as the “Birth of the cool“ session. ”Gerry Mulligan impressed me and I knew what I wanted to do. He was my first model. I realized the enormous possibilities in the baritone.” (3)

Chet Baker, who had played and recorded with the Gerry Mulligan quartet, was surprised when he heard Gullin. “The only baritone player that I was aware of was Gerry Mulligan. When I heard Lars, I thought, Jesus, there is another way of playing the baritone! Lars played with a lot more fire and a lot more authority in some ways than Gerry did. Gerry was more of an arranger on his horn than a soloist, although he did play some nice solos from time to time, but I thought that Lars was really strong, a very talented man.” (4)

Gullin joined Chet Baker’s band in October 1955 playing a few concerts in Stuttgart, Lucerne, Zurich and Basel, then finishing the tour in Paris. After the last concert, Baker wanted Gullin to record with his quartet but pianist Dick Twardzik didn’t show up for the session in the studio. As it turned out, it was Gullin who discovered Twardzik’s dead body in a hotel room. The cause of death was a heroin overdose. Unfortunately plagued by his own demons, Lars Gullin himself was a drug addict and had his own significant troubles dealing with it. The music presented in this compilation was mostly unpublished and was recorded between 1959 and 1963, a period where Gullin almost completely vanished from the scene because of his drug problems and rarely did any recordings.

In June 1959, Flavio Ambrosetti set up his own recording session and invited Lars Gullin. The drummer in that session, Pierre Favre, remembers: “Flavio Ambrosetti was a wealthy man because he owned a factory where the tires for Opel were produced. Every summer he invited several musicians for a recording in Lugano. Barney Wilen was there several years. Lars felt very comfortable there; I remember he was smiling a lot. He was such great musician, a very sensitive and calm guy who just loved the music, maybe more than he loved himself. On bass was Eric Peter and Lars liked his playing a lot, but that didn’t surprise me, everybody enjoyed playing with Eric, even Chet Baker wanted to play with him.“ (5)

Another Gullin recording from this period happened in Stockholm in 1962, featuring bass player Georg Riedel who had come to Stockholm as a refugee from Czechoslovakia when he was four. “I had just finished school and played on jam sessions in the club Nalen. When Lars Gullin came by and heard me he asked me to join his quintet. So we toured in 1953 and 1954. I really admired Gullin. Never before I had heard somebody playing the baritone saxophone like him. His style was not bebop but this melodic, Nordic style. That was new to me. To make his sound even softer, he sometimes put a handkerchief in the bell of his horn. We played Jazz for an audience that expected dance music, so they were not happy with us but some Jazz fans really loved us. Lars Gullin really had problems with drugs and when we were on tour, we had no driver, but Lars was driving the car. That really was dangerous. That’s why I decided to leave his band. I then played with Arne Domnérus for 25 years, but I kept playing with Lars for recordings, not for concerts. At our last recording, he didn’t show up in the studio and we were told, that he had passed away the day before.” (6)

On May 17, 1976, Lars Gullin died of a heart attack, caused by his use of methadone. He was only 48 years old. He is still considered to be one of the most unique Swedish Jazz musicians ever. The Danish drummer Alex Riel, who also played with Gullin in 1962, really was impressed by his outstanding talent. “You know, I played with Gerry Mulligan who had a big ego and was not a nice guy. But Lars had a much more individual sound and better ideas about Jazz than Mulligan. And I am not saying this because Lars was Swedish. Years later, when I was touring with the rock band The Savage Rose, we played in a theater on the same night when Gullin was playing there. Even if he didn’t look so well and even if his sound was a bit weaker than usual, he still sounded great!” (7) Admired by his peers as a unique and brilliant talent, Gullin’s legacy perseveres in the recordings, in his effortless style and in his dexterity that greats like Chet Baker truly appreciated.

Recorded 1959-1963 in Europe
All tracks previously unreleased, except track 2,
* bonus tracks, available on CD version and digital album only
(not on Vinyl LP)