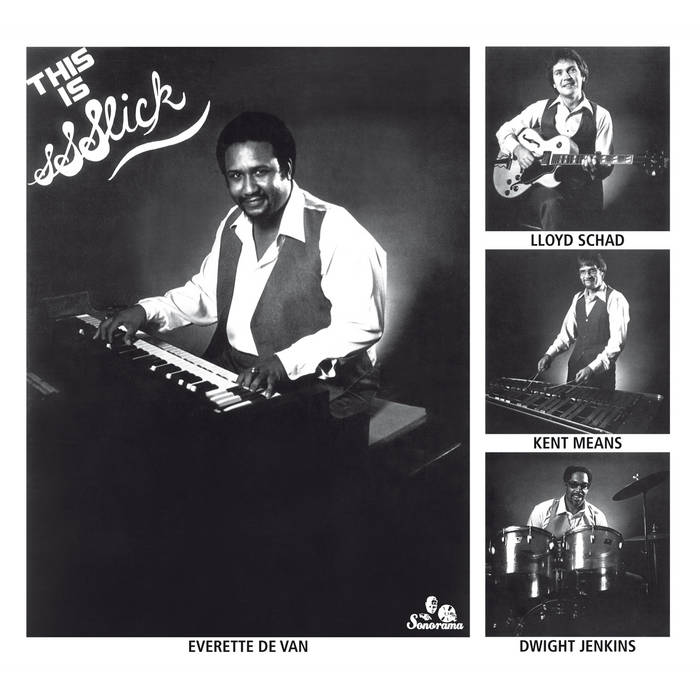 This is not a perfect album, thank heaven. Perfection is sterile ... unreal. Remember it`s the kelp on the beach that gives it color; the crag on the mountain that gives it character; the cloud in the sky that gives it motion. Summing up, it is the feeling they have for their music, for each other, and for you, their audience – that makes “This is ssSlick” worthwhile.

Lloyd`s mellow voice and guitar are introduced in “The Song is You” where everyone contributes their two-cents (or sixteen bars) worth. Lloyd is a big favorite of mine and I`m especially impressed with his vocal duplications, simultaneously scatting the instrumental line in octave unison. You`ll get a taste of what I`m talking about later on. My favorite cut “Crisco”, really cooks, pardon the pun. Composed by Everette, it illustrates ssSlick`s penchant for funk, with DeVan and Jenkins in particulary good form; Dwights street-wise traps are testimony to his touring days with James Brown. On “Next Time You See Me”, a shuffle type blues, Dwight doubles as vocalist, although Everette endeavors to steal the show with some “organomics” that could have you believing someone changed the speed to 78 RPM. Lloyd and Kent take solo turns on the familiar standard, “Somewhere Along The Way”, offered here in a touch-dance tempo. A big band sound is simulated on “Teach Me Tonight” (no easy task for a quintet) and all five seem to have a nice, walkin` tempo good time.

”The People`s Choice” is a melodic minor key bossa, great to listen to and blessed with a nice guitar interlude midstream. A straight ahead version of “I`ll Remember April” (one of my faves of all time) featuring Lloyd is followed by his laid back guitar/ vocal opening the door to “Gypsy in my Soul”, a refreshing variation from the usual barn burner arrangement. “Stormy Monday” is ushered in (via Everette) with what a moan sounds like when it`s orchestrated. You`ll marvel at the George Benson-like inventions offered by Lloyd, and I think you`ll agree that this one has the power to stop clocks, cure ills, maybe even change the economy. Another DeVan original, this time a Latin number called “Voodoo Village” features Kents backphrasing vibes for openers and Everette hot on his heels with a racy and rapid fire B-3 solo. Once more everyone pitches in a passage and the only things missing are the vines and the parrots.

I had the pleasure of performing with both Everette and Kent in a group that played the old colony a few years back. We`d amuse ourselves (and occasionally the audience) by trying to surprise each other with new variations of old melodies ... unexplored patterns of familiar themes. It was a lot of fun and I think all of us grew as a result. We`re in different groups now but as I listen to the album I`m reminded of the camaraderie that prevailed during those Colony days. I`m very happy for Everette, Kent and their new group (I`m less familiar with Pat and Dwight – more about Lloyd in a moment, but having heard them I feel they`re a worthy addition) and I`m happy too, to share my impressions of their efforts on “This is ssSlick”! They perform regularly in and around Kansas City and I hope you`ll make a point of checking them out in person. You`ll be glad you did!

A special thanks to Pat Morrisey for adding his distinctive trumpet accent. And to our many friends and followers who support us and the music we love. (The words of “ssSlick”, from original cover)