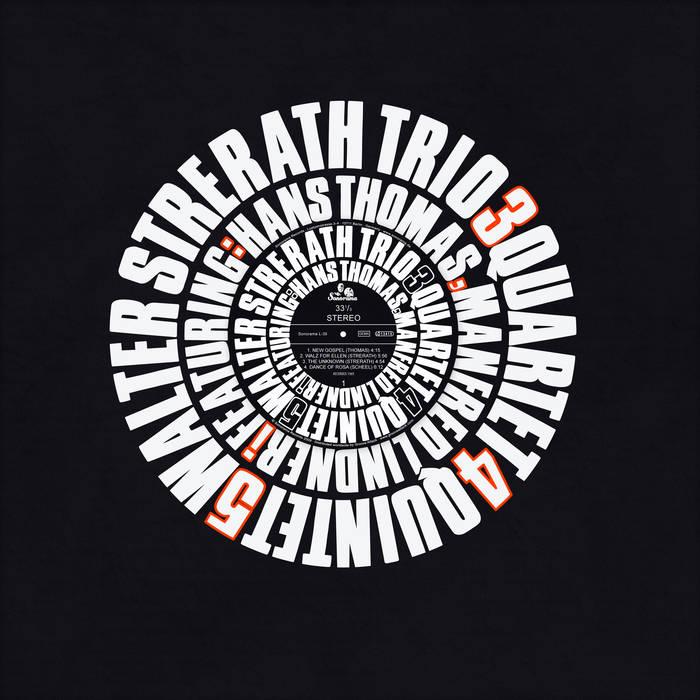 Legendary and in demand Modern/ Modal/ Hard Bop Jazz album from Germany and among the true holy grail of European LPs, produced 1969. First recordings by the internationally awarded pianist Walter Strerath with trio, quartet and quintet, incl. Hans Thomas/ trumpet-fluegelhorn and Christian Lindner/ saxes, originally released in a very small edition of a few hundred copies only on the tiny “jazz groove” label. Impossible to find monument of a rare "Coltranish" jazz LP from Germany.

Modern Jazz will never die and it doesn`t smell funny anymore: The original vinyl pressing of „Walter Strerath – Trio Quartet Quintet“ reached the highest amounts of all sold records in December 2008 on ebay.com, in third place and priced at 3.000$ behind two vintage albums of the Beatles and Pink Floyd. For many years the biggest international jazz collectors have tried to hunt down this first album by a commonly unknown (and nearly forgotten) jazz pianist from the small German village named Odenkirchen. The original album was manufactured in a tiny edition of approx. 200 copies only and is impossible to find nowadays.

The unique LP contains 100% of self penned tunes and stands out as some brilliant Coltranish styled jazz from Europe, some dare to say the only real one of its kind. The usual Walter Strerath Trio performed regionally since the mid 60s and their line-up was enhanced with trumpet, fluegelhorn and saxes just for this recording session.

Now Sonorama Records comes up with a 1:1 repressing of this vanished album - exactly 40 years after the original release saw the light of day on Karlheinz Klueters` legendary “jazz groove” label. The reissue label payed attention to a nearly identical reproduction of the (formerly silk screen-printed) gatefold cover in silver and grey colour and with original center punch. All original recordings were carefully mastered and even the CD cover adapts the exceptional artistic design by Uwe Loesch and Juergen Hillmer from Duesseldorf, appearing very close to the original artwork.

Walter Strerath earned himself the reputation as one of the best jazz pianists from Europe. The talented boy developed a deeper interest for jazz after his classical piano education and imagined the foundation of his own trio. He soon became enthusiastic about the records by Oscar Peterson and attended the concerts of many big American artists in Germany. As early as 1958 Walter Strerath presented his first solo performances. He also joined the popular Jazzbandballs and even became a member of the regional jazz club in Moenchengladbach, but still worked in his usual job as an industrial manager. Between 1963 and 1967 he collected several national awards as an amateur and performed at the Friedrich-Gulda-Festival in Vienna. This time a jury around the great Duke Ellington voted him for the best jazz pianist of the festival. After the trios` second place at the amateur festival in Zuerich, the musicians started extensive touring in many European countries. Then a new trio formation recorded the second and final album “Fly to Brazil” in 1975, on which the musicians cultivated their very own style of bossa nova jazz. Walter Strerath passed away completely unexpected at the age of 39, due to a heart attack on the 23rd of September 1981. A South American tour was already organized for 1982 but could not happen anymore because of his sudden death. (Ekkehart Fleischhammer/ References: Newspaper “Rheinische Post” of September 25th 1981, “Moenchengladbacher Koepfe” Volume 2)

Foundation: 1966
1967: First prize at the 3rd international Amateur Jazzfestival in Duesseldorf.
All musicians of the trio won the award as best soloists in „modern style“.
Personal success of Walter Strerath in Vienna at the Friedrich Gulda competition.
He belongs to the best pianists of the European jazz scene.
1968: 2nd place at the Amateur Jazzfestival in Zuerich.
Release of an exclusive Walter Strerath Trio track on the Festival LP in Switzerland.
1st prize at the Dutch Jazzfestival in Doeticham.
Moreover the Trio received numerous awards at European festivals and competitions.
Successful tours in France, Czechoslovakia, the Netherlands, Belgium and Luxemburg, Switzerland and Austria.
On this particular album the Walter Strerath Trio also appears as a quartet and quintet (with guests Hans Thomas tp/ flh und Manfred Lindner as/ss)

Name: Scheel, Christian names: Andreas, Date of Birth: 20.5.1946, Place of Birth: Jena, Height: 178 cm, Colour of eyes: blue
Unchanging marks: b, official remarks: member of the Walter Strerath Trio for a short time... he played the guitar earlier and changed to the bass in 1965.

The recorded tunes on this album were composed by Walter Strerath, Andreas Scheel and Hans Thomas.

Producer for re-issue: Ekkehart Fleischhammer, original recordings mastered by Jury Lutz, original graphic design and layout 1969 by 2Eck-Produktion Duesseldorf (Uwe Loesch und Juergen Hillmer), reproduction of original cover 2008 by Patrick Haase (rab.bit). Deep respect and big thanks to Ellen and Esther Strerath for supporting and helping out on this reissue. Remember: “You will not possess the original album, unless you are the Bill Gates of record colllecting!” ;-)