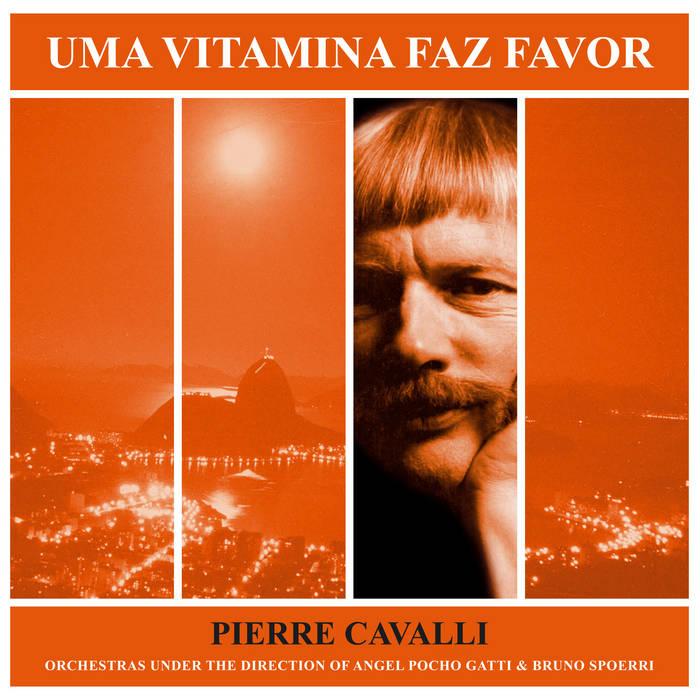 The gaye device More easy library heaven! Such a treat for my ears.

Vitamina De Brasil: The Brazilian "Tristeza" has already infected Europe in the early 60s, with the film "Orfeu Negro" and a commercialization of Bossa Nova. At the end of the decade Brazilian artists like Caetano Veloso and Gilberto Gil created Tropicalia, a synthesis of pop, rock, jazz and Brazilian music. Composer, guitarist and bassist Pierre Cavalli from Zurich traveled to Brazil in 1968 and stayed there for a whole year. Upon his return to Switzerland, he worked on recordings that should convey his musical impressions of Brazil. In 1971 Cavalli produced and played music in his hometown, mostly with his own small ensembles and as a studio musician. Some Brazilian-inspired instrumental and vocal tracks were recorded spontaneously with the excellent ensembles of Angel Pocho Gatti (Italy/ Argentina) and Bruno Spoerri (Switzerland), in various studios and for advertising purposes only. Some of the recorded music was used in local TV advertising or appeared on a vinyl LP for the promotion of an airline, while the remaining tunes were put in the vault immediately after production. The final result is this “lost” and newly mastered album by Pierre Cavalli, released here for the first time ever.

"Uma Vitamina Faz Favor" is a journey of sound, infiltrated by music from South America and in a style of the best Italian film soundtracks of that time. With the acoustic or trippy electric guitar in the center of attention, Cavalli and his musicians developed a complex range of sounds, a mixture of funk, dreamy bossa nova, jazz fusion, Latin blues and references to film music. The album generates a high degree of intimacy, with Latin flutes and percussion, Fender Rhodes, vibraphone, analog synthesizers and wind or vocal inserts, often psychedelic tinged and sometimes even framed by imitations of nature sounds from Brazil. The jazz fusion piece "Caçador" (in a later version included on the Spoerri LP "Container", entitled "Brain Hunter") and the bossa breakbeat tune "Passarinhos" are funk gems and take the listener to the Brazilian rain forest with their electronic effects. The wordless vocal work in "Possarinhos" or "Lembrança do Santos" is reminiscent of scat legends like Edda Dell`Orso or the best De Wolfe Library LPs by Barbara Moore. Driven by Cavalli's catchy uptempo guitar lines, the sounds of "Alegria" and "Cachaça" come out of the speakers with South American joie de vivre. Laid back tracks like "Transmissão mutàvel", "Tranquilamente" or "Tecidos" are full of fine melodies and Cavalli`s spacey guitar licks, clearly referring to the Brazilian hippies and their psychedelic nonchalance. "Uma vitamina faz favor" and the love declaration "Therezinha Meu Amor", even sung by Cavalli himself (probably unique in his recording career), are breezy bossa novas and the only songs with lyrics.

Six sought after tracks hail from an impossible to find one-sided testpressing from 1972, an unreleased promotional album for the airline „Swissair“ entitled „Rio De Janeiro“. It comes from the vaults of Pierre Cavalli and was recently discovered by his wife Nanda Cavalli. All music is played by „Pierre Cavalli et son ensemble“ with „paroles et musiques de Pierre Cavalli et vocalises de Merry Francen“. The ensemble is led by Argentinean born soundtrack master Angel „Pocho“ Gatti who conducted the best Italian Big Band during the 1970s. These recordings were produced by Cavalli and remain as the only source of collaboration between Cavalli and Gatti. The other eight tracks were rediscovered by Bruno Spoerri, who started to record some Brazilian-tinged compositions with his favourite guitarist Cavalli in various places at the same time. Some of the best Swiss jazz musicians like pianist Renato Anselmi, flutist Fernando Vicencio, bassist Heinz Pfenninger or drummer Curt Treier belonged to their frequently changing ensemble, in which Spoerri led the production and used to play various synthesizers. Thanks to the efforts of Nanda Cavalli and Bruno Spoerri, „Uma Vitamina Faz Favor“ is a mind-blowing record and a truly great find.


Pierre Cavalli (1928-1985) played various guitar styles on innumerable European album productions from the 1950s to the 1970s. Already in the 1940s he had become a friend of Django Reinhardt and attended his performances in Paris. He performed with well known jazz artists like Art Simmons, Hans Koller, Peter Trunk, Daniel Humair or Wolfgang Dauner and made excellent commercial productions for music libraries. Cavalli became employed by Friedrich Gulda as his first big band guitar player, joined the “Swiss All Stars” and performed with the excellent but short-lived fusion bands “Oimels” (MPS) and “Emphasis” (Pick). He was well known throughout the studio scene, played in several orchestras, appeared at galas, composed music for French tv-serials and belonged more to the showiz than to the “serious” jazz scene. His impressive discography lists over 500 titles.

Bruno Spoerri (*1935) earned his degree in Applied Psychology in 1958, after he had already played saxophone in various bands as a student (including the Modern Jazz Group Freiburg). From 1957 to 1975 he belonged to the Zurich "Metronome Quintet" with which he toured internationally and recorded several Albums and EPs. In the 1970s Spoerri became musical director of the jazz festival Zurich several times and has performed with many international jazz greats. Back in 1967, he began to experiment with electrified saxophone, effect units and Ondes Martenot, and went deeper into the electronic music scene through the purchase of an EMS VCS3 synthesizer. To date he still works as a freelance composer, sound engineer and author (editor of "Jazz in Switzerland"/ Chronos Publishing). At present, Spoerri deals primarily with the interactive potential of electronic music equipment.

Angel „Pocho“ Gatti (1930-2000) from Buenos Aires was an outstanding pianist, arranger, conductor and composer. He worked mainly in Italy during the 1960s and early 70s. With his orchestras, that included Italian jazz masters like Gianni Basso, Giorgio Gaslini or Oscar Valdambrini as soloists, he accompanied American stars like Frank Sinatra, Sarah Vaughan or Johnnie Ray. Already during the 1950s Pocho Gatti frequently played at the „Bop Club Argentino“ in Buenos Aires with world reknowned musicians like Lalo Schifrin, „Chivo“ Borraro or Gato Barbieri. Later on he recorded with Giorgio Azzolini in Italy. At the end of the 1960s his Milan Big Band, the "big orchestra Angel Pocho Gatti", belonged to the most famous European ensembles. Subsequent productions of the 1970s include prestigious work for Quincy Jones and collaborations with Gerry Mulligan and Astor Piazzolla.