by The European All Stars 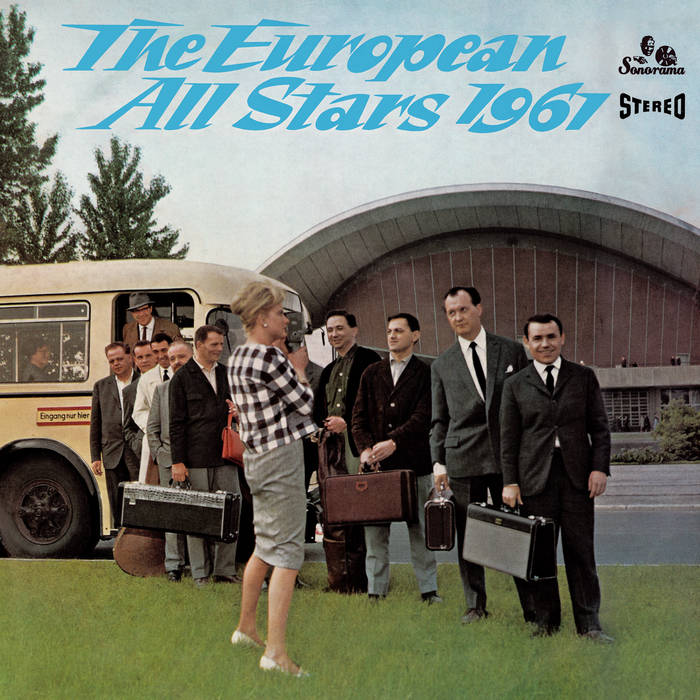 At Whitsun, jazz lovers from all parts of Germany, and even from the large regions behind the Iron Curtain met in Berlin. They were there to see and hear jazz on stage, its different musical ways of expressions, and its various relations to other forms of art. This festival was marked by two highlights: first, the genius of Thelonious Monk spreading dramatic tension, as usual, and the performance of the European All Stars presented by Joachim-Ernst Berendt.

„Thirteen musicians came together, from twelve countries - each country sending its leading musician,“ says Berendt. „Some of these musicians had difficulties making themselves understood – linguistically. But what they had to say musically harmonized much better than international discussions usually do. I`d be glad to write about the All Stars impartially, but it`s me that brought them together. The actual formation of the group was no more than a matter of organization. The selection of the All Stars was to be made as impartially as possible. Therefore we approached jazz magazines in the various countries and leading European jazz critics, asking them to nominate the musicians most representative of their national jazz-scenes.“

In reality, the selection was more than just a matter of organization, for musicians that are the best in their countries don`t necessarily make good members of an All Star group. In order to produce not only a sequel of incoherent spotlights on soloists, but a European concert, some previous sorting out had to be done with good taste.

During the rehearsals at SFB studios, that atmosphere of relaxed tension developed which is a characteristic of good jazz. Unobtrusively the respective arrangers took the lead for the rehearsals of their compositions. Though some of the ensembles may not be as balanced and solid as if they had been in the book for a long time, the mutual understanding of all the musicians is felt throughout. Monica Zetterlund behaved quite naturally, not at all like a star, but simply like a musician among fellow-musicians.

Most of the arrangements were penned by the Belgian Francis Boland. Berendt writes: „An arranger must have a good knowledge of the musicians for whom he writes. On the other hand, the musicians must get the feeling that the arranger`s work agrees with that they want to improvise.

Where to find a European arranger with these qualifications, to write for a mixed group of musicians from Scandinavia, France, Spain, Turkey and half a dozen other countries? One name kept on turning up: Francis Boland, formerly an arranger for Count Basie in New York, and now working for Kurt Edelhagen in Cologne. His was the lion`s share of the arrangements. His composition „High Notes“, based on the contrast of the bass of Erik Amundsen (Norway) with the trumpets of Mufay Falay (Turkey) and Dusko Goykovich (Yugoslavia), was a highlight of the All Stars concert at the Kongresshalle in Berlin.

The reeds, Arne Domnerus (Sweden), Hans Koller (Austria) and Ronnie Ross (England), made up a particularly compact section. The three sax players created a fascinating collective improvisation with interweaving and crossing lines and complete harmonic freedom. The rhythm section, too, grew together remarkably fast: drummer William Schiöpffe (Denmark), bassist Amundsen (Norway), Franco Cerri (Italy) and pianist Martial Solal (France). Martial was the composer of a small concerto for himself and six brass, „Avertissez Moi“: a brilliant, accomplished piano concerto in the jazz idiom. The second pianist of the All Stars was the blind Spaniard Tete Montoliu, the first to introduce Spanish jazz into the European jazz scene.

Tete is a gospel-inspired funky pianist like those normally only found among the musicians of Detroit or Harlem. The brilliant Algerian French Martial Solal and the agressive, uncomplicated Catalan Tete Montoliu are as different from each other as two jazz pianists can possibly be. Still, like so many other young musicians, both have like their roots in Thelonious Monk.“

The concert on Whitsunday was a great musical success. Every bar of this original recording from the Kongresshalle proves it. Such as they were, Joachim-Ernst Berendt took the All Stars with him to Baden-Baden to produce a TV show for September 18, 1961. Thus will be an occasion not only for record collectors to realize that these jazz musicians, with their mutual human and musical understanding, are well ahead of many of the so-called „reasonable people.“

Recorded in Stereo on May 21,1961 at Kongresshalle, Berlin