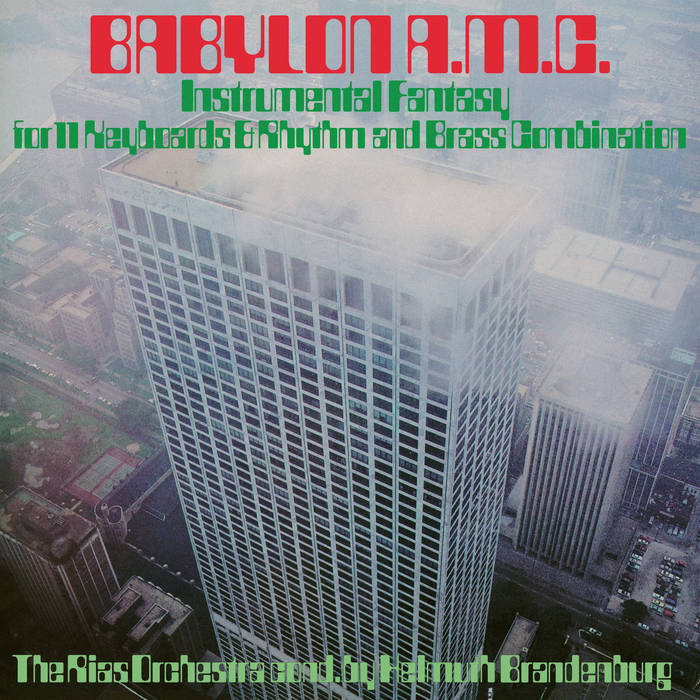 "Babylon A.M.C." Subtitle: “Instrumental Fantasy For 11 Keyboards & Rhythm and Brass Combination” is a highly sought-after library album by composer and pianist Helmuth Brandenburg - a progressive fusion composition of ten individual tracks, produced in 1978 with musicians of the Berlin RIAS Orchestra. These tracks move unconventionally between genres such as cosmic funk, fusion jazz, electronica, world music and touches of a Giallo soundtrack. First reproduction of the German LP on the label Intersound, transferred from the master tape, File under: Moroder meets Morricone, AIR and Popol Vuh.


This album is the most advanced and versatile work by German composer, pianist and saxophonist Helmuth Brandenburg. The music is arranged in the form of a suite, as a progressive fusion composition of ten individual tracks. These tracks move unconventionally between genres such as jazz, funk, electronica, world music and touches of a Giallo soundtrack. This melting pot flows much like a concept album.

The vinyl LP of the same name was created in 1978 at the RIAS recording studio in West Berlin. An excursion into the so-called "Sound Library" territory for the independent label "Intersound". The music was used exclusively for the synchronization of TV films and radio spots. There is a clear association to the sounds of Giorgio Moroder, Popol Vuh and the French band AIR. Brandenburg mixes these influences and styles in order to shape his own sound vision. For the names of the individual tracks, he only uses terms that hail from ancient Babylon.

Analog synthesizers were still young in the 1970s and one can clearly hear the enthusiasm for experimentation with which Helmuth Brandenburg uses them. Synthesizers are used to create a wall of sound to replace the string instruments. Then used again as the main instrument to provide the melody. On the other hand, Brandenburg is an experienced orchestra leader, still largely rooted in the Analog age and clever enough not to overload the music with electronic effects. The horns contribute important accents to the sound and his rhythm section consists of a punchy electric bass, funky drums and wah wah guitars.

As a composer and arranger, he makes use of a wide variety of influences. The brilliant intro of the LP starts with a full range of cosmic synthesizer sounds, followed by drum rolls and a juicy brass section. A very accentuated rhythm and a funky guitar, in mid-tempo, lead the way into flawless Jazz Funk. This sound dominates the opener "Ele Toldoth" and "Pru Urebu” and is reminiscent of the music from American "cop shows" of the 1970’s. The situation is completely different with the electronic soundscape of the track “Amram”, which is comparable to the later “French Sounds” by AIR or Etienne De Crecy, before a completely surprising and unusual flamenco guitar takes over the melody.

In “Neschamah“, Brandenburg combines similar electronic sounds and effects with a jazzy alto saxophone. With “Tardema” he layers many sounds from “cosmic” synthesizers to create an otherworldly piece of music. All eleven keyboards play around two single piano notes in “Abed”. The track inevitably brings to mind the minimal motifs of Steve Reich or a soundtrack by Philip Glass. On the other hand, the spinet-like guitar effect of "Nahor" is reminiscent of an Italo western movie with music by Ennio Morricone or other Italian soundtracks. "Thariah" spreads ambient moods and "Athbash" creates a disco atmosphere in the typical "Munich Sound" of the time. Finally, “Schem-Ajin-Beth” takes up the musical theme of the opener and provides a triumphant conclusion to Brandenburg's fantasy journey.

Helmuth Brandenburg could have been a musicologist or history professor with a particular penchant for music, but fate wanted it differently. He was born in 1928 and his opportunity for a high school diploma fell victim to the chaos of war. It was from an early age that he was forced to earn his own living. As a child he liked to play music and his natural talent was later refined, through extensive training at the Schumann Conservatory in Düsseldorf. As a pianist he was already perfect when his interest began to shift from “serious” to “light” music. To base his activities on an even broader musical foundation, he also learned to play the tenor saxophone. His skills brought him various jobs as a successful jazz musician and arranger.

From 1970 to 1973, Brandenburg led the Berlin RIAS Orchestra as the successor to Werner Müller and Dave Hildinger. He saw it as his main task to develop a new big band sound, which was not difficult for him due to his exceptional arrangement skills. Under the pseudonym Kookie Freeman and with a record deal, he expanded the spectrum of the orchestra and adapted it to the fashions of the time. Brandenburg used new electronic production techniques and added beat and rock music to his repertoire. He then founded the Helmuth Brandenburg Orchester, which also appeared under the names The Helmuth Brandenburg Pop Symphony Orchestra or Kookie Freeman Velvet Sound. During this time, he produced commercial albums in an easy listening style.

Brandenburg also composed music for countless TV series and orchestrated the soundtrack to the German film classic “Das Mädchen von Hongkong” (“The Girl from Hong Kong”/ music: Gerhard Narholz). In 1971 he recorded two albums “Big Band Beat” and “Brandenburg At The Philharmonic” for BASF. He also recorded several library LPs for the music publishers Sonoton, “Toledo” and “Babylon A.M.C.” for the “Intersound” company. On release, these recordings were not available in regular stores. Brandenburg loved his exotic pseudonyms - “Terence Yucca”, “Ted Rideout” and “David Xerxes”. He died January 17th, 2012.