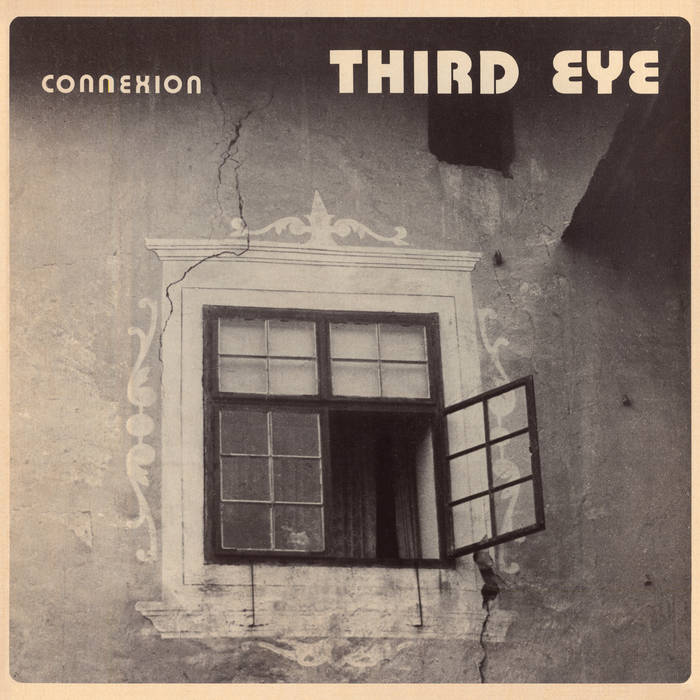 rufusdos This album is wild. What a find. Deep abstract jazz fusion with strong soloists and great funk and abstract moments. This label is a treasure trove. Favorite track: Landings.

„Third Eye“ was formed in the Netherlands as a piano/ bass/ drums jazz trio and later expanded into an international band led by bassist Alfred „Ali“ Haurand. The group played a terrific mix of modal jazz, spiritual jazz, bop and fusion. In 1976 they recorded their fiirst album simply entitled „Third Eye“. For this second album named „Connexion“ and released the following year, Ali Haurand brought the Jamaican Jazzman Wilton Gaynair (1927-1995) into the band.

„Connexion“ mainly contains original material by Wilton Gaynair and stands out as a landmark in the fields of European progressive jazz from the 1970s. The LP includes the excellent Latin/ Brazil fusion track "Ogetnom", made famous by French DJ Cam on a long deleted Jazz Fusion Compilation from 1994. The band pursues a considered and planned format in jazz with four extended album tracks, that combine creative voices in both the writing and performing areas. Their music is inventive, intriguing, imaginative and well played.

Wilton Gaynair and Gerd Dudek are not just blowing experts who „wail“ frantically. Together with their solos, the intelligent charts written for only a 2-man front line reflect and support the total performance in a perfect way. In the rhythm department, they are ably supported by the voices of Frank Köllges, Ali Haurand and Steve Boston, tastefully performing their own limited solo chores. It seems that each note of Haurand`s full-toned bass is carefully cultivated in pitch and timbre. Köllges was one of the true „all rounders“ regarding the drumming while Rob van den Broeck came up with unusual ideas on Fender Piano or synthesizer.

The album may also be viewed as a suite, basing on colour and climate, with separate parts oscillating between ethereal moods and the more rhythmic, fusion-oriented patterns. During the 1970s, new impulses have come from abroad and became a part of the European jazz scene, for example: West Indian, Brazilian or African - clearly documented on this rare LP with its full-blooded fusion feeling. At the same time the style of „Third Eye“ relied on a sense of form or structural cohesion which has been part and parcel of the European music tradition.

The vinyl album was originally released on the small German independent label „Ring Records“ in an edition of 600 copies only and became a sought after collector`s item over the years. It was produced by architect, painter and jazz drummer Hans Köllges, father of Frank Köllges (1952-2012). The master tape for this first reissue was kindly provided from the estate of Frank Köllges, stocked at the „Heinrich-Heine-Institut“ in Duesseldorf. Final support came from Claas Brieler (Jazzanova), who traced this rare gem and supplied an original copy of the rare LP.

The third and final album by „Third Eye“ was recorded live in 1982 and released on the small label „View Records“. This was followed by an extensive tour featuring Wilton Gaynair, Tony Levin, Alan Skidmore and Kenny Wheeler. Their music was not „strict, once and for all“ - „live“ it sounded different from one concert to the next. Until the band`s split, they always played strong, resourceful music with self-relaxed confidence. From today´s view, some talented perfectionists simply knew what to do and enjoyed it a lot.

Wilton „Bogey“ Gaynair (1927-1995) was born in Jamaica, West Indies, and studied at the Alpha Cottage School together with Joe Harriott, Don Drummond and Harold Mcnair. From 1948 he played in the Jamaican All Stars, with the band of Redver Cooke and in an own group. Then he moved to Europe, played and recorded in London 1959 (album: „Blue Bogey“ on the Tempo label) and studied music in Germany, where he finally settled and worked for some years in the band of pianist George Maycock. He also played in the band of Kurt Edelhagen for many years, recorded this album with the band „Third Eye“ and joined the orchestra of Peter Herbolzheimer. He also played with Gil Evans, Freddie Hubbard, Bob Brookmeyer and Shirley Bassey. During a concert in 1983 he suffered a delibitating stroke and was forced to abandon playing. Until 1995 he lived near Düsseldorf.

Rob van den Broeck (1940-2012) was born in Hilversum/ The Netherlands. He was a pianist and painter, started with Dick Vennick and later played with the Chris Hinze Combination. In the 1960s he worked alongside musicians such as Ben Webster, Dexter Gordon and Louis Hayes on their tours of Dutch jazz venues and has been involved in productions of Wilton Gaynair, Joe Farrell and Billy Higgins. Rob van den Broeck was also known as head of the band "Free Fair". In 1976, he started a long-standing collaboration with Ali Haurand in the band "Third Eye". Haurand invited him to join his European Jazz Ensemble in 1981 and to play in formations with Tony Levin, Tony Oxley and Gerd Dudek. He was also co-founder of “The Trio” with Gerd Dudek and Ali Haurand. From 1980 to 2000 he taught piano at the Academy of Arts in Arnhem. His paintings have been shown in various exhibitions.

Frank Köllges (1952-2012) was a musician, percussionist and multimedia artist. Under the pseudonym Adam Noidlt he founded the "padlt noidlt performance group" with his colleague Mike Jansen in 1969. From 1970 to 1975 he studied at the Academies of Music in Graz and Cologne. Shortly thereafter he founded the Cologne jazz trio and also joined "Third Eye". In 1980, he established the band "Klimarkant". Moreover Frank Köllges became a member of the Düsseldorf Industrial band "Die Krupps" in 1981. Together they recorded the original version of the “Stahlwerksinfonie” ("Steel Mill Symphony"), that became "Record of the Week" in the English "New Musical Express". Until 1990 he played in the "Adam Noidlt Intermission Orchestra" and with Ulrich Tukur. In 2000 Köllges founded formations such as the "Modern Percussion Quintet", "AutoFab" and the "Bimbo Town Orchestra Leipzig".

Gerd Dudek (Born in 1938 near Wroclaw) was a member of the Kurt Edelhagen Big Band, played with Helmut Brandt and in the quintet of Manfred Schoof, in a quartet with Albert Mangelsdorff and with the German All Stars. In 1968 he undertook a tour of South America as a member of the German All Stars and worked with George Russell or Don Cherry. In 1971 he went on tour in Asia with Mangelsdorff. Many tours also brought him to the USA, Canada, Australia and in 35 other countries together with Ali Haurand and Rob van den Broeck. Gerd Dudek is co-founder of the European Jazz Ensemble. Even today, he is a member of the Contemporary Orchestra by Alexander von Schlippenbach and the Globe Unity Orchestra. Since 1976 he is connected to Ali Haurand through 26 vinyl and CD releases.

Ali Haurand (born in 1943 in Viersen) is playing in different groups, projects and international touring ensembles. As a bass player and founder of the European Jazz Ensemble he invented an important interface for German and European jazz musicians. As sideman for Philly Joe Jones, Ben Webster and Don Byas he went on tour, then played in the trio and quintet of pianist George Maycock during the 1960s. In addition to "Third Eye", he was heard in the "Trio SOH" with Tony Oxley and Alan Skidmore, later on in formations with Charlie Mariano, Joachim Kühn, Daniel Humair or Joachim Kühn. To date, Ali Haurand also works as artistic director of the Jazz Festival Viersen and the Duesseldorf Jazz Rally.

Steve Boston (Born in 1935 in Suriname) enriched the lessons for non-Western music at the conservatories of Rotterdam, Arnhem and Hilversum, where he taught percussion. The high level of Latin drummers in the Netherlands is due in large part to his efforts. Since the 1950s, he played congas in various jazz bands and worked with Dutch jazz pioneers such as Max Woiski Jr. ("Ritmo Natural") and Hans Dulfer. On his 75th Birthday the Amsterdam "Bimhuis" promoted a big concert for his famous former student in which particular colleagues and friends performed. Steve Boston recently quit playing due to health problems.