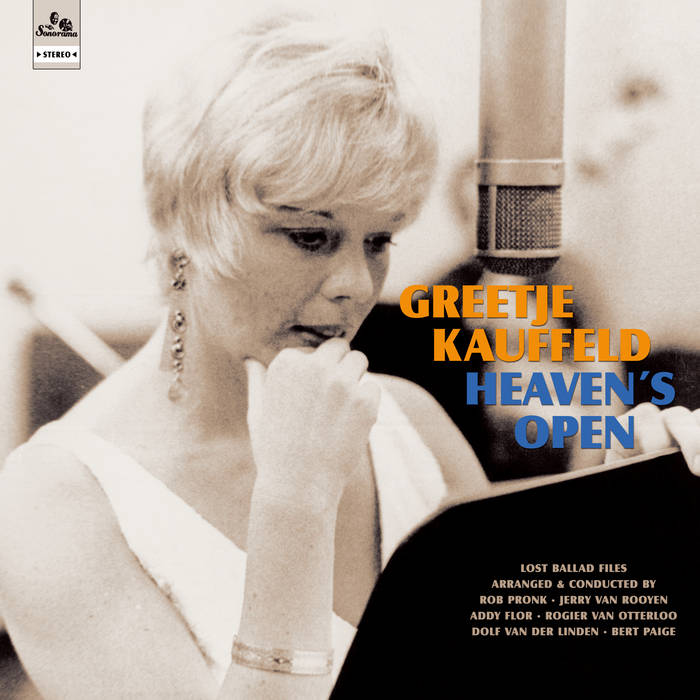 New set of lost tracks by one of the outstanding European jazz singers, recorded between 1969 and 1986. Compilation with eleven deeply emotional songs: Greetje performs sensitive ballads, with bands and orchestras arranged and conducted by such masters as Rob Pronk, Jerry Van Rooyen or Rogier Van Otterloo - including five previously unreleased recordings with the Metropole Orchestra. "What has always touched me is her emotional devotion to the song or the story it tells. She sings as she is: a warm and tender person" (Toots Thielemans)

As one of the outstanding and constantly active, European jazz ladies, Greetje Kauffeld looks back on an incredible, almost 60 year long, career. Long ago in 1960, she recorded her first jazz EP with English lyrics for the Dutch Decca label. Its last song "Who knows why", performed in a uniquely emotional "Torch Song" style, was finally decisive for the discovery and unprecedented development of the artist Greetje Kauffeld. The Great American Songbook is the repertoire she knows best, and most of all she loves the ballads.

The Dutch girl wanted to be a singer since she was six years old. Aged nine she was listening to the songs of Louis Armstrong, Peggy Lee, Nat King Cole or Frank Sinatra. Doris Day became her initial idol, as Greetje loved her way of singing, directly into the ear of the listener with the very personal warmth and shades of her voice. Then she won her first serious audition in 1956 and became the new singer of the well known Skymasters Big Band. From now on, the 17-year old was heard regularly on Dutch radio. Three years later she left the big band as a freelance singer to appear in a tv show entitled „Greetje Kauffeld sings“, accompanied by the band of sax player Tony Vos. At the same time she sang in the legendary jazz club „Sheherazade“ in Amsterdam , together with the resident band „The Diamond Five“ of pianist Cees Slinger. They performed the jazz repertoire made famous by singers like Ella Fitzgerald or Sarah Vaughan.

Then Greetje should mainly succeed as a pop singer in Germany and Holland during the 1960s and appeared in numerous tv shows, magazines and radio programmes. She recorded over 20 singles for the Geman Polydor and Columbia labels and landed hit after hit with colleagues such as Paul Kuhn. "You have to hear this voice," the German Polydor label campaigned in 1961 for her single "Nur eine schlechte Kopie” (“Just a bad copy"). Then came the new beat and rock bands and paved the way for a fundamental change in the music industry and the fashions of time. Around 1968 the „Flying Dutch Girl“ had to realize that her career as an entertainer reached some sort of dead end.

Greetje moved to the US with the goal to gain fresh experiences and new artistic ideas. Overseas she performed with Johnny Mann and Herb Ellis in the Joey Bishop Show. Moreover she recorded a (sadly lost) bossa nova album with the band of Brazilian guitarist Oscar Castro-Neves in Los Angeles. In New York she stepped in the audience of a Harlem jazz club by coincidence, together with her future husband, producer and mentor Joop De Roo. The evening developped into their first encounter with the world elite of jazz. On the programme: The Miles Davis Group with Herbie Hancock and Wayne Shorter - in front of an audience of six people only. A truely moving, almost spiritual experience, as Greetje recalls today.

Back in the Netherlands she married Joop in 1969 and had two children, Nathalie and Mark. Moving away more and more from the German entertainment industry and the corresponding pop image, she tested her abilities with the greats of jazz and developped her skills. From now on the artist Greetje kauffeld devoted her entire talents to jazz. Free from the laws of music industry, with the production of Joop including the best arrangers and musicians available, she recorded some highly sought after jazz albums during the 1970s: „And Let The Music Play“ (1974), „He Was A King Uncrowned - a tribute to Clifford Brown“ (1976) and „Some Other Spring“ (1980).

Already in 1969, Greetje recorded the lost version of a song by Jimmy Woode Jr., „Dear Death“. She sang with the orchestra of Bert Paige, produced by Tony Vos as the earliest recording on this compilation. Four years later the singer lent her wordless vocals to a special but lesser known ballad song by Antonio Carlos Jobim, called „Andorinha“. It features the trumpet of Rick Kiefer and the voices of Greetje and Rob Pronk organized into choirs by overdubbing. The recording was solely released on Rick Kiefer`s lost album „Lush Life“. His band also included the highly respected musicians Ack van Rooyen, Palle Mikkelborg, Rob Franken and Sabu Martinez.

In 1975 Greetje won the radio award at the Nordring Festival in Oslo as best soloist. Moreover she worked with American artists like Mark Murphy or Stan Getz and also appeared on the sought after Diamond Five album „Back Together“ The first and last song of this compilation was recorded in 1976 for the small German library label „Colorit“ of producer Werner Tautz. Her version of „The Way We Were“, made famous by Barbara Streisand and Doris Day. is often described as sheer bliss by fans and collectors, but is hard to find and has never been reissued. On this title track from the film of the same name, Greetje is accompanied by the musicians of Addy Flor, including Charly Antolini, Karl Drewo, Armin Rusch and the Munich String Section.

Besides Joop de Roo, the highly respected arrangers Rob Pronk and Jerry van Rooyen became Greetje`s biggest supporters. They knew each other for a lifetime and worked together since 1949. Both played trumpet aswell as piano and developped into some of the best arrangers Holland ever produced. Rob and Jerry toured Indonesia, the USA and Europe before settling in Germany. Their works could be heard regularly on Dutch radio and tv, played by the world reknowned Metropole Orchestra conducted by Dolf van der Linden.

In 1975 Joop De Roo organized various sessions for this big ensemble in Hilversum under the working title „the composers portraits“. Greetje and the orchestra, with soloists like Piet Noordijk, Ack van Rooyen and Ferdinand Povel, presented special versions of songs from the Great American Songbook. All five unreleased tracks on this compilation hail from these performances. Eleven years later Greetje performed two songs on a rare album entitled „my Romance“, this time with the Metropole string orchestra conducted by Dolf van der Linden. „You Must Believe In Spring“ and „Vincent“ belong to the own personal favourites out of her repertoire. For the production of this album, Joop received the „Edison“, the Dutch Grammy.

To this day, she has recorded many more CDs and has been heard live in many countries. Her catalogue has grown with more jazz album highlights like „The Real Thing“ (1994), „Dreaming“ (2000) or „My Shining Hour“ (2005). With a jubilee concert in 2007, the venerated artist was honored for her fiftieth year on the stage. That evening Greetje performed with the Metropole Orchestra again, now conducted by Jörg-Achim Keller, featuring soloists Ack van Rooyen, Piet Noordijk and Ferdinand Povel. This is definitely not enough space to list all her great performances, awards or accomplishments for the jazz in Holland and Europe. Finally after all these years, besides the fabulous artistic level, her modesty and great human warmth must be emphasized.
Keep going Greetje!

Track 1/ 11: with Addy Flor and his orchestra recorded 1975 at Trixi Tonstudio in Munich, arranged and conducted by Addy Flor, produced by Werner Tautz

Track 3: with Bert Paige and his orchestra recorded 1969 at Phonogram Studio in Hilversum, arranged and conducted by Bert Paige, produced by Tony Vos

Track 4/ 7: with the Metropole String Orchestra recorded 1986 at AVRO Studio in Hilversum,arranged and conducted by Rogier van Otterloo, produced by Joop De Roo

Track 6: with the band and string orchestra of Rick Kiefer recorded 1973 at Rhenus Studio in Cologne,
arranged and conducted by Rob Pronk and Jerry van Rooyen, produced by Joop De Roo