The Cole Nobody Knows 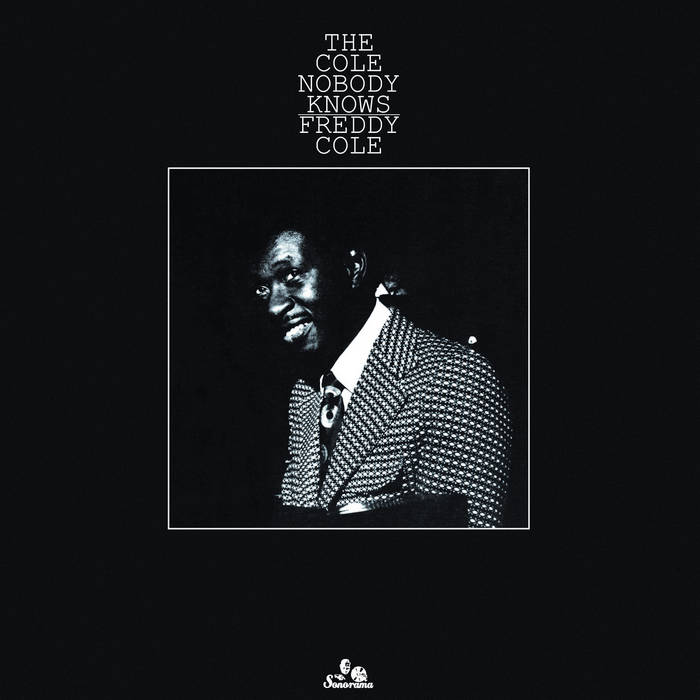 Holy Grail soul jazz album by Freddy Cole (1931-2020) , singer, pianist, and Nat “King” Cole`s youngest brother, recorded 1976 in Atlanta. Privately pressed LP including his famous version of “Brother Where Are You” plus stunning jazz ballad performances of “Live For Life” and “Miss Otis Regrets” or rough blues tracks like “A Man Shouldn`t Be Lonely” and “Waiter Ask The Man To Play The Blues”. 1:1 reissue of an extremely rare and highly sought after album, originally released on the small imprint “First Shot” from Georgia, remastered and with original first press cover artwork.

Sonorama is proud to reissue a legendary and sought after soul jazz LP that will send shivers down your spine. Singer & pianist Freddy Cole, youngest brother of Nat “King” Cole and uncle of Natalie Cole, is a truly unique interpreter with an impressive career from 1952 until 2020. This very rare and privately pressed LP was recorded back in 1976 and finally gets its first remastered 1:1 reissue with original cover artwork (First Shot label), including such greats as “Wild Is Love”, “Brother Where Are You” and “Live For Life”. The original pressing of this album is highly sought after all over the world and fetches ridiculous prices at auctions. Even another LP release of the same set of recordings with different cover art, pressed 1977 on the Audiophile label, is nearly impossible to find today. “Freddy Cole has had a great career, wether or not you`ve ever heard of him” (Pittsburgh Post-Gazette 2006).

“The Cole Nobody Knows“- Original liner notes from 1976:

In reality, Freddy Cole is hardly someone that nobody knows. The unique style and musicianship apparent on this album are primary reasons why Freddy Cole is recognized to be one of the most outstanding interpreters of song today. Freddy is the youngest of four brothers, one of whom is the late Nat “King” Cole. Comparisons are inebitable … the general feeling being that there are moments of similar phrasing. Nevertheless Freddy Cole has taken his distinct talent from his childhood home in Waukegan, Illinois, to the Juilliard School of Music and the New England Conservatory to sophisticated hotels and cabarets all over the world. The Jimmy Van Heusen lyrics, “This is a lovely way to spend an evening” is the most perfect introduction to an evening performance of Freddy Cole, wether it be in person or on record. The Cole nobody knows … hardly!

"I started playing piano at five or six," Freddy remembers. "Music was all around me." In the Chicago home of his youth, visitors included Duke Ellington, Count Basie, and Lionel Hampton. He also credits Billy Eckstine as a major influence. " He was a fantastic entertainer," Freddy recalls. " I learned so much from just watching and being around him." After a possible career with the NFL was shelved due to a hand injury, he began playing and singing in Chicago clubs as a teenager. Although he was ready to hit the road at 18, his mother intervened and he continued his musical education at the Roosevelt Institute in Chicago.

Freddy moved to New York in 1951, where he studied at the Juilliard School of Music and found himself profoundly influenced by John Lewis, Oscar Peterson and Teddy Wilson. He got a Master's degree at the New England Conservatory of Music and then spent several months on the road as a member of an Earl Bostic band that also included Johnny Coles and Benny Golson.

It was back in New York that Freddy successfully laid the groundwork for his career. He developed a vast repertoire of songs in Manhattan bistros and concurrently began to supplement his live performances with television and radio commercial jingle work.

Freddy has been a recording artist since 1952, when his first single, "The Joke's on Me", was released on an obscure Chicago-based label. He recorded several albums for European and English companies during the 1970s that helped him develop a loyal overseas following. Cole believes that becoming an international favorite made him "widen my scope a little bit". He developed a stand-up act, a better rapport with audiences, and learned to sing in other languages. "It made me much more of a performer."

Cole doesn't apologize for sounding like his brother, Nat "King" Cole. There are certain unmistakable similarities. He plays piano and sings and performs live with guitar and upright bass, just like Nat. Yet his voice is raspier, smokier, jazzier even. But he has emerged from the awesome shadow cast by his elder brother. In truth, his phrasing is far closer to that of Frank Sinatra or Billie Holiday than that of his brother and his timing swings a little more. His vocals - suave, elegant, formidable, and articulate - are among the most respected in jazz. Freddy Cole passed away June 27, 2020.

Some quotes about Freddy Cole:

"Freddy has an impeccable sense of swing...he is, overall, the most maturely expressive male jazz singer of his generation, if not the best alive" (The New York Times)

"Freddy bears a standard and is an inspiration to those of us who love the music. It's reassuring to hear the magic he brings, and it's reassuring to me that sometimes he chooses one of my songs to sing." (Abbey Lincoln)

"Freddy has that combination of talents that makes a great singer: a wonderful choice of material, phrasing that makes a song believable, and a voice that creates a "deep purple" mood in his ballad singing" (Chris Connor)

„His talent and music are like a fine, rare wine“ (Benny Golson)